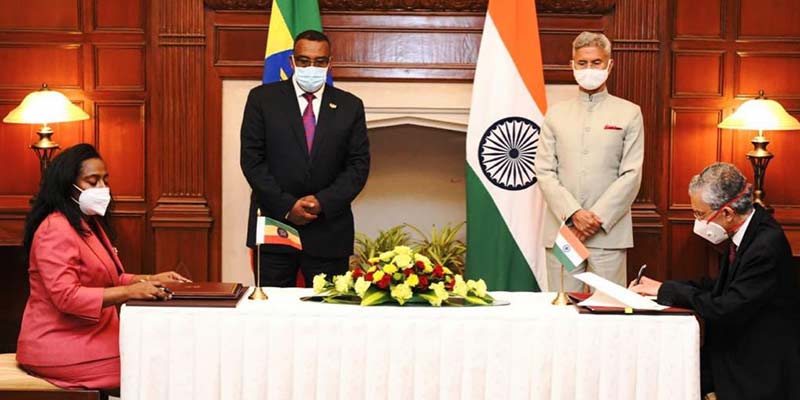 • Agreement were on Mutual Visa Exemption for holders of Diplomatic Passports and an MoU between the Council of Scientific and Industrial Research – Central Leather Research Institute, India and Wollo University, Ethiopia.

• Both jointly inaugurated the newly-constructed Chancery building and Embassy residence of the Embassy of Ethiopia in New Delhi on 18 February 2021.

• Historical linkages between India and Ethiopia go back about 2,000 years of recorded history.

• India’s relations with Ethiopia have been traditionally close and friendly. Successive Ethiopian regimes have been appreciative of the fact that India was never been hostile to Ethiopia’s interests.

• Recently, the India - Ethiopia Innovation Programme, conceived as part of India’s commitment under the India Africa Forum Summit-III was launched on 23 May 2019.

• India gifted medicines worth US$ 2 million to the Ministry of Health of Ethiopia.

• India's total trade with Ethiopia stood at US$1.271 billion in 2017-18, out of which India's exports to Ethiopia were US$1.224 billion and imports were US$47.45 million, according to the National Bank of Ethiopia annual report.

• India is the third most important source of imports for Ethiopia, contributing 10.1% of all of Ethiopia imports next to China and Kuwait. India contributed 1.6% of Ethiopia's export to the world.