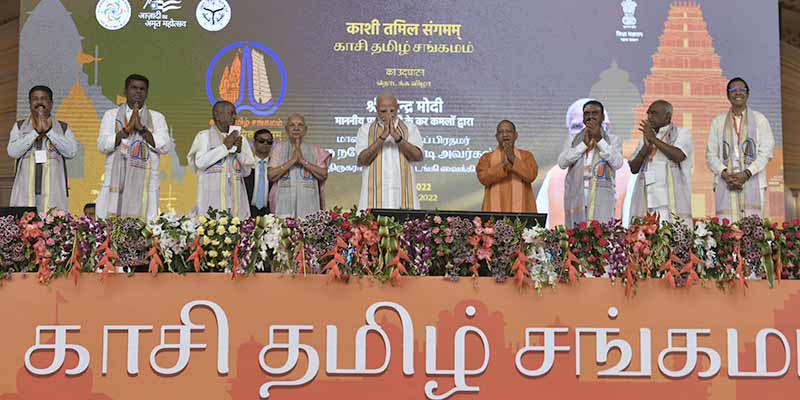 PM Modi said Kashi-Kanchi have an important place among the ‘Sapta Puris’, the seven pilgrimage centres that, according to Hindu beliefs, lead to salvation.

• The Kashi Tamil Sangamam shall be an ideal platform to understand the unity in India’s civilisational assets through two historic centres of knowledge and culture.

• More than 2,500 delegates from Tamil Nadu are visiting Varanasi and will participate in seminars and interact with local people of similar trade, profession and interest.

• The conclave in the pilgrim city is part of the prime minister’s initiative of ‘Ek Bharat, Shreshtha Bharat’ that portrays unity among the cultural diversity of various states and Union Territories.

• The ‘Ek Bharat, Shrestha Bharat’ programme, aims to actively enhance interaction between people of diverse cultures living in different states and UTs in India, with the objective of promoting greater mutual understanding amongst them.

• It aims to foster national integration by a coordinated mutual engagement process between states, Union Territories, central ministries, educational institutions and the general public through linguistic, literary, cultural, sports, tourism and other forms of people to people exchanges.

• The programme was launched by Prime Minister Narendra Modi on October 31, 2015.

• The ministry of education coordinates its implementation.

• As per the programme, each year, every state/UT would be paired with another state/UT for reciprocal interaction between the people.

• It is envisaged through this exchange, that the knowledge of the language, culture, traditions and practices of different states will lead to an enhanced understanding and bonding between one another, thereby strengthening the unity and integrity of India.

• The states and UTs are to embark on a mission to enhance their cultural, academic and economic ties by entering into a wide range of mutual engagements with the paired states/UTs covering the spheres of music, drama, cuisine, language, history, tourism and other forms of exchange between the people.