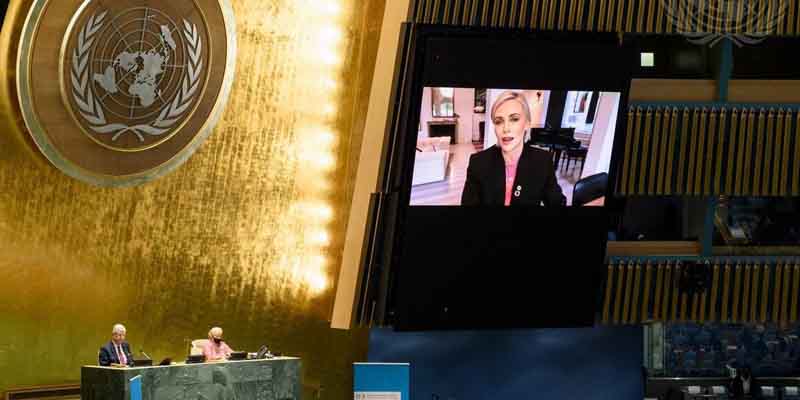 • The UN General Assembly (UNGA) approved a declaration calling for urgent action to end AIDS by 2030, noting with alarm that the COVID-19 pandemic has exacerbated inequalities and pushed access to AIDS medicines, treatments and diagnosis further off track.

• The declaration commits the assembly’s 193 member nations to implement the 18-page document, including reducing annual new HIV infections to under 370,000 and annual AIDS-related deaths to under 250,000 by 2025.

• It also calls for progress toward eliminating all forms of HIV-related stigma and discrimination and for urgent work toward an HIV vaccine and a cure for AIDS.

• The assembly said the coronavirus pandemic has created setbacks in combating AIDS, widening fault lines within a deeply unequal world and exposing the dangers of under-investment in public health, health systems and other essential public services for all and pandemic preparedness.

• UNAIDS Executive Director Winnie Byanyima said 77.5 million people have been infected with HIV since the first case was reported in 1981 and nearly 35 million have died from AIDS.

One of the deadliest pandemics of modern times

• If the person’s CD4 cell count falls below 200, their immunity is severely compromised, leaving them more susceptible to infections.

• The most advanced stage of HIV infection is acquired immunodeficiency syndrome (AIDS), which can take many years to develop if not treated, depending on the individual.

• HIV can be transmitted via the exchange of a variety of body fluids from infected people, such as blood, breast milk, semen and vaginal secretions. HIV can also be transmitted from a mother to her child during pregnancy and delivery. Individuals cannot become infected through ordinary day-to-day contact such as kissing, hugging, shaking hands, or sharing personal objects, food or water.

• The symptoms of HIV vary depending on the stage of infection. Though people living with HIV tend to be most infectious in the first few months after being infected, many are unaware of their status until the later stages.

• As the infection progressively weakens the immune system, they can develop other signs and symptoms, such as swollen lymph nodes, weight loss, fever, diarrhoea and cough. Without treatment, they could also develop severe illnesses such as tuberculosis (TB), cryptococcal meningitis, severe bacterial infections, and cancers such as lymphomas and Kaposi’s sarcoma.

• Since 2016, WHO has recommended that all people living with HIV be provided with lifelong antiretroviral therapy (ART), including children, adolescents, adults and pregnant and breastfeeding women, regardless of clinical status or CD4 cell count.

• By June 2020, low and middle-income countries reported that they have adopted this policy, and approximately half of them reported country-wide implementation.

• Globally, 27.4 million people living with HIV received ART in 2020. This equates to a global ART coverage rate of 73 per cent. However, more efforts are needed to scale up treatment, particularly for children and adolescents.

• New HIV infections have increased in at least 33 countries since 2016.

• Africa, especially sub-Saharan Africa, has demonstrated the most progress in tackling the AIDS epidemic but it also remains the worst-affected region.