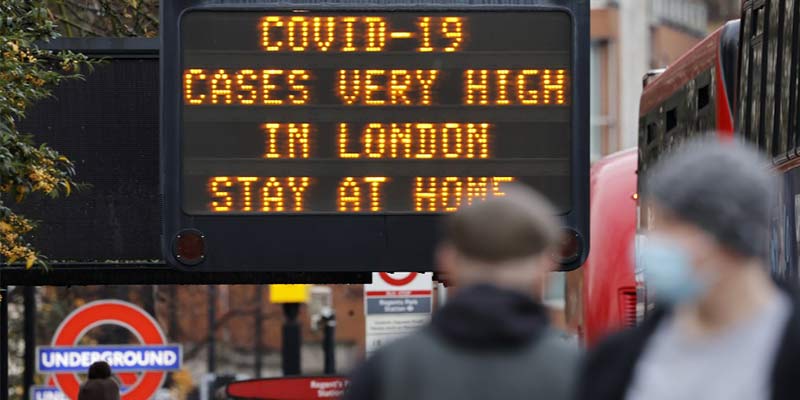 • A new strain of coronavirus has prompted the UK government to impose a Tier 4 lockdown in London and South East England and tighten restrictions  over the festive period.

• South Africa has also identified a new variant of the coronavirus that is driving a second wave of infections in the country.

• Many countries around the world have slapped tough travel restrictions on the UK because of a new and seemingly more contagious strain of the coronavirus in England. India, Canada, France, Germany, Italy, Spain and Sweden were among the countries that suspended flights from Britain for various lengths of time.

What is this new strain of virus in the UK?

• All viruses, including SARS-CoV-2, change over time. SARS-CoV-2 mutates regularly, acquiring about one new mutation in its genome.

• Authorities of the UK and Northern Ireland reported to WHO that a new SARS-CoV-2 variant was identified through viral genomic sequencing. This variant is referred to as SARS-CoV-2 VUI-202012/01 (Variant Under Investigation, year 2020, month 12, variant 01).

• Initial analysis indicates that the variant may spread more readily between people. Investigations are ongoing to determine if this variant is associated with any changes in the severity of symptoms, antibody response or vaccine efficacy.

• The variant was picked up as part of an epidemiological and virological investigation initiated earlier in December 2020 following an unexpected rise in COVID-19 cases in South East England.

• The new VUI-202012/01 variant has been identified in several countries including Australia, Denmark, Italy, Iceland and the Netherlands.

What are the features of this new strain?

• The variant is defined by the presence of a range of 14 mutations resulting in amino acid changes and three deletions.

• Some of these mutations may influence the transmissibility of the virus in humans:

1) One of the mutations identified (N501Y) is altering an amino acid within the six key residues in the receptor binding domain (RBD). This variant has a mutation in the RBD of the spike protein at position 501, where amino acid asparagine (N) has been replaced with tyrosine (Y). The shorthand for this mutation is N501Y, sometimes noted as S:N501Y to specify that it is in the spike protein.

2) Another mutation of biological significance, P681H, has been found in the RBD.

3) The deletion at position 69/70 has been found to affect the performance of some diagnostic PCR assays that use an S gene target.

Most PCR assays worldwide use multiple targets and therefore the impact of the variant on diagnostics is not anticipated to be significant.

• Preliminary reports by the UK are that this variant is more transmissible than previous circulating viruses, with an estimated increase of between 40-70 per cent in transmissibility (adding 0.4 to the basic reproduction number R0, bringing it to a range of 1.5 to 1.7).

• Laboratory studies are ongoing to determine whether these variant viruses have different biological properties or alter vaccine efficacy. There is not enough information at present to determine if this variant is associated with any change in severity of clinical disease, antibody response or vaccine efficacy.

• Scientists are working to learn more about this variant to better understand how easily it might be transmitted and whether currently authorised vaccines will protect people against it. At this time, there is no evidence that this variant causes more severe illness or increased risk of death.

• On December 18, the South African government announced that it had also seen the emergence of a new strain of SARS-COV-2 — which is known as 501.V2 — in a scenario similar to that in the UK. It is also referred to as B1.351.

• The South African variant also has the N501Y mutation and several other mutations but emerged completely independently of the UK strain and is not related to it.

• Britain has detected a new variant of the coronavirus in contacts of cases who have travelled from South Africa. 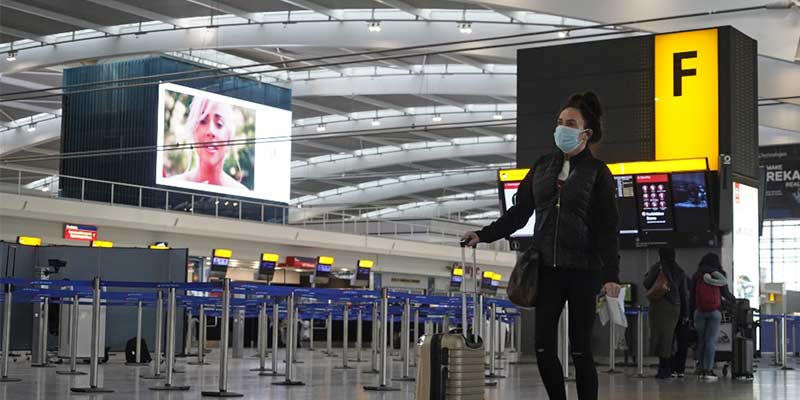 How other countries responded?

• India has suspended all passenger flights connecting to the UK till December 31 in the wake of the emergence of the mutated variant of the coronavirus, joining several other countries that have imposed a similar flight ban.

• A number of countries like Canada, Turkey, Belgium, Italy and Israel have banned flights from the UK.

• Trucks waiting to get out of Britain backed up for miles and people were left stranded at airports. The move stoked worries about shortages at a time of year when the UK produces very little of its food and relies heavily on produce delivered from Europe by truck.

• France announced that it was closing its borders to trucks from Britain.  Hundreds of vehicles, mainly operated by drivers from continental Europe, became stranded outside the English Channel port of Dover. Around 10,000 trucks pass through the port of Dover every day, accounting for about 20 per cent of the country’s trade in goods.

• Global markets were knocked off highs after the UK government reported the new strain of the coronavirus. It has battered stocks worldwide, including in India, darkening the prospects of early economic recovery.

Notes
reproduction number R0 The reproduction rate, or RO (pronounced R-naught), of a virus is a measure of its transmission, or the number of new infections generated by each case. An RO rate of 1, for example, means on average each infected person will infect one other person they come in contact with.
Related Topics
RELATED STORIES