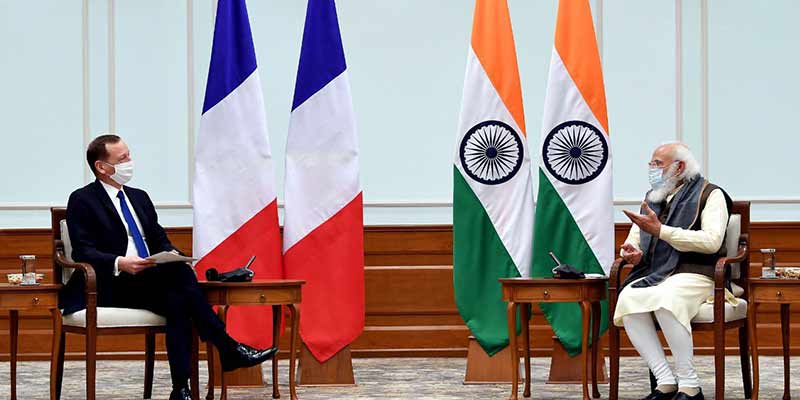 • India and France discussed key issues such as counter-terrorism, maritime security and cooperation in the Indo-Pacific region at their annual strategic dialogue and vowed to accord high priority to their partnership.

• Bonne highlighted that France will work closely with India in the UN Security Council in 2021-2022 and reiterated France’s support for India’s bid for a permanent seat.

Highlights of the strategic dialogue:

• The agenda of the strategic dialogue covered all aspects of the Indo-French strategic partnership in the Indo-Pacific and in the fields of space, defence, security, civil nuclear energy, among others. On each topic, the two sides noted the high degree of convergence of views and agreed on concrete steps to further enhance their cooperation.

• Both sides reiterated their attachment to an inclusive, rules-based Indo-Pacific which contributes to a multipolar Asia in a multipolar world.

• They held discussions on a variety of issues including counter-terrorism, cybersecurity, defence cooperation, maritime security, regional and global issues and cooperation in the Indo-Pacific region.

• Both sides reaffirmed the high priority they accord to the India-France strategic partnership and highlighted the convergence of views between the two countries.

• India and France entered into Strategic Partnership in 1998.

• The relationship is marked by a close and growing bilateral relationship, frequent high-level exchanges and increasing convergence of views on a range of international issues.

• The areas of defence and security cooperation, space cooperation and civil nuclear cooperation constitute the principal pillars of our Strategic Partnership.

• Apart from traditional fields of cooperation, India and France are increasingly engaged in new areas of cooperation like security in the Indian Ocean Region, fight against terrorism, the International Solar Alliance, sustainable growth and development among others.

• India and France share a wide degree of convergence on a range of regional and global issues. France has continued to support India’s claim for permanent membership of the Security Council and the reforms of the United Nations. France’s support was vital in India’s accession to Missile Technology Control Regime (MTCR), Wassenaar Arrangement  and Australia Group (AG) while Paris continues to support New Delhi’s bid for accession to the Nuclear Suppliers Group (NSG).

• In the economic domain, where there exists vast potential, French businesses and enterprises have forged strong linkages with the Indian economy and industry. There exist vibrant bilateral cultural and educational linkages as also growing people-to-people contacts.

• India and France have a rich history of cooperation in the field of space for over 50 years with ISRO and the French Space Agency (CNES) carrying on various joint research programmes and launch of satellites.

• Both countries have important bilateral investments and trade and commercial cooperation.

• Almost 1,000 French companies are present in India with a total turnover of $20 billion and employing around 300,000 persons. France is one of the largest foreign investors in India with cumulative investment of $6.59 billion from April 2000 to December 2018. In France, about 150 Indian companies are present (including sub-subsidiaries) with an estimated investment stock of one billion euros and employing 7,000 people.

• In March 2018, Nuclear Power Corporation of India Limited (NPCIL) and Electricite de France (EDF) of France signed an Industrial Way Forward Agreement for implementation of six nuclear power reactor units at Jaitapur in Maharashtra with a total capacity of about 10 GW.

Notes
Missile Technology Control Regime The Missile Technology Control Regime (MTCR) is an informal political understanding among states that seek to limit the proliferation of missiles and missile technology. The regime was formed in 1987 by the G-7 industrialised countries. There are currently 35 countries that are members (partners) of the MTCR.
Wassenaar Arrangement The Wassenaar Arrangement has been established in order to contribute to regional and international security and stability, by promoting transparency and greater responsibility in transfers of conventional arms and dual-use goods and technologies, thus preventing destabilising accumulations. Participating States seek, through their national policies, to ensure that transfers of these items do not contribute to the development or enhancement of military capabilities which undermine these goals, and are not diverted to support such capabilities. The aim is also to prevent the acquisition of these items by terrorists. The Wassenaar Arrangement is presently composed of 42 countries.
Australia Group The Australia Group (AG) is an informal forum of countries which, through the harmonisation of export controls, seeks to ensure that exports do not contribute to the development of chemical or biological weapons. Coordination of national export control measures assists Australia Group participants to fulfil their obligations under the Chemical Weapons Convention and the Biological and Toxin Weapons Convention to the fullest extent possible. It was established in 1985. The Group has met regularly since then, and annual meetings are now held in Paris. The number of countries participating in the Australia Group has grown from 15 in 1985 to 42 plus the European Union.
Related Topics
RELATED STORIES