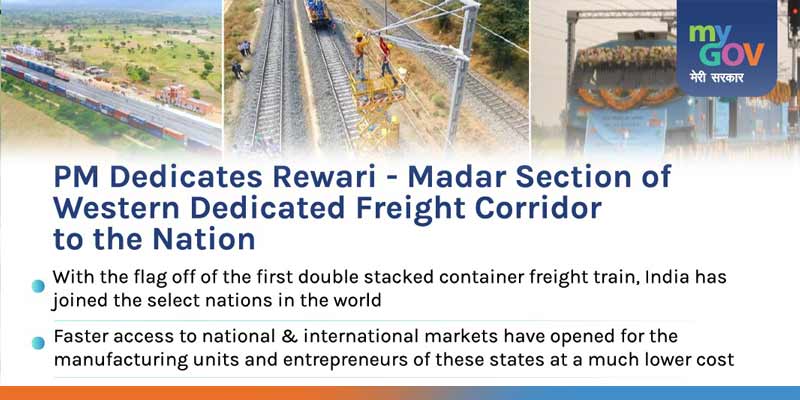 The Rewari-Madar section of the Western Dedicated Freight Corridor was dedicated to the nation by Prime Minister Shri Narendra Modi.

• The EDFC starting from Sahnewal near Ludhiana (Punjab) will pass through the states of Punjab, Haryana, Uttar Pradesh, Bihar and Jharkhand to terminate at Dankuni in West Bengal.

• The Western Corridor connecting Dadri in Uttar Pradesh to Jawaharlal Nehru Port (JNPT) in Mumbai will traverse through the states of UP, Haryana, Rajasthan, Gujarat and Maharashtra of WDFC.

• Total value of Contracts including Civil, Electrical and S&T is Rs. 5800 crore in this section excluding land.

• The opening of this stretch will benefit various industries in Rewari – Manesar, Narnaul, Phulera & Kishangarh areas of Rajasthan, Haryana and National Capital Region. .

• In addition to this, the container depot of CONCOR at Kathuwas will also come on the DFC map and get advantage in terms of faster throughput.

• The ports of Gujarat like Kandla, Pipavav, Mundhra, Dahejetc will have an uninterrupted connectivity to the Northern parts of India.

• With the dedication to the Nation of the 351-km Bhaupur-Khurja section, and construction of connecting link between Khurja - Boraki-Dadri- Rewari, seamless movement between WDFC & EDFC can ensue.

• DFCCIL had conducted a trial-run of Indian Railways (IR) freight trains on this section.

• The newer, advanced wagons can carry weights upto 81 ton per wagon at an approximate speed of 100 kmph. The newer wagons are safer and modern too.

• BLCS-A and BLCS-B wagon prototype have enhanced axle load of 25 tons and been designed to maximize capacity utilization and uniform distributed and point loading.

• Increase the average speed of goods trains from existing 25 to 70 kmph.

• Connect the existing ports and industrial areas for faster movement of goods.

• Reduce the logistic cost of transportation

• Heavy and long Haul train operation of 25 Axle ton with having provision of 32.5 Ton axle load for the First time in India.

• Automated New Track Construction (NTC) machine which can lay track at the speed of 1.5 km per day.

• Equipped with Insulated Gate Bipolar Transistors (IGBT) based propulsion technology, the WAG 12B uses regenerative braking, reducing energy consumption. With 1676 mm of Broad Gauge, these e-locos are designed to take smooth turns even at the sharpest of curves.

• The second loco which is attached in the middle and working as a piped loco of the long haul train is WAG 9 of 6000 HP built from Chittaranjan Locomotive Works (CLW), West Bengal, India.