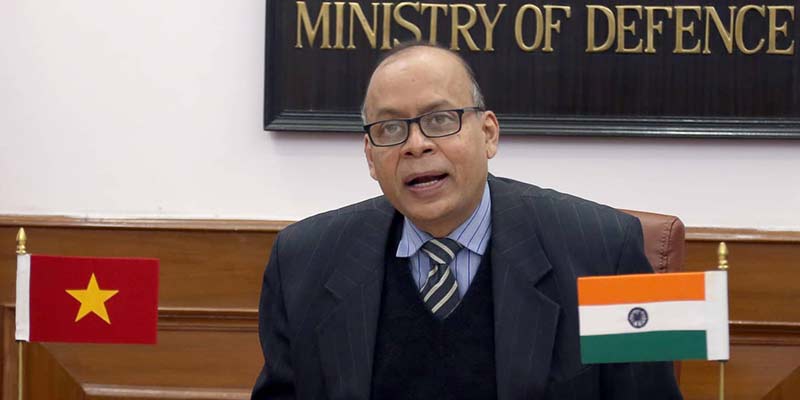 • During the virtual interaction, Defence Secretary and the Deputy Defence Minister exchanged views on the plan of action that has emanated from the recently concluded Virtual Summit between Prime Minister Shri Narendra Modi and Prime Minister of the Socialist Republic of Vietnam H.E. Nguyen Xuan Phuc in December 2020.

• They expressed satisfaction at the growing defence ties between the two countries.

• Both the sides reviewed the progress on various bilateral defence cooperation initiatives and expressed commitment to further elevate engagements between the Armed Forces under the framework of the Comprehensive Strategic Partnership.

• Both sides agreed that in the recent past our respective countries have made notable strides in Defence Industry and Technology cooperation and look forward to even greater cooperation in this field.

• The navies of India and Vietnam held a four-day maritime exercise off Cam Ranh Bay in Vietnam in April last year with an aim to boost operational cooperation.

• In Dec 2020, an Indian Navy warship undertook a 'passage exercise' with the Vietnamese Navy in the South China Sea.

• India and Vietnam upgraded their ties to a comprehensive strategic partnership in 2016 and defence cooperation has been one of the more significant elements in the fast-expanding bilateral ties.

India-Vietnam relations have been exceptionally friendly and cordial since their foundations were laid by founding fathers of the two countries - President Ho Chi Minh and President Rajendra Prasad and Prime Minister Nehru.

Bilateral trade between India and Vietnam has seen continuous growth over the past many years. India is now among the top ten trading partners of Vietnam. According to GOI data, total trade between the two countries during April – Nov of fiscal year 2016-2017 was US$ 6244.92 million. The two sides agreed to set the target of bilateral trade at USD 15 billion by 2020.