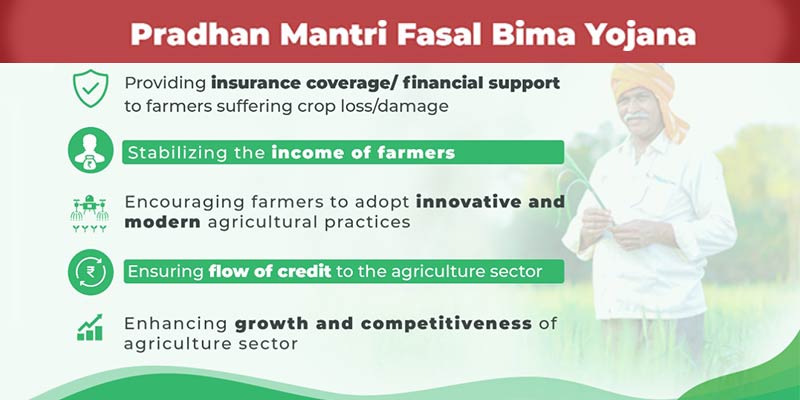 • 5 years ago, on 13th January 2016, the Government of India took a historic step towards strengthening risk coverage of crops for farmers of India and approved the flagship crop insurance scheme - the Pradhan Mantri Fasal Bima Yojana (PMFBY).

• The scheme was conceived as a milestone initiative to provide a comprehensive risk solution at the lowest uniform premium across the country for farmers.

• Premium cost over and above the farmer share is equally subsidized by States and GoI.

• However, GoI shares 90% of the premium subsidy for North Eastern States to promote the uptake in the region. 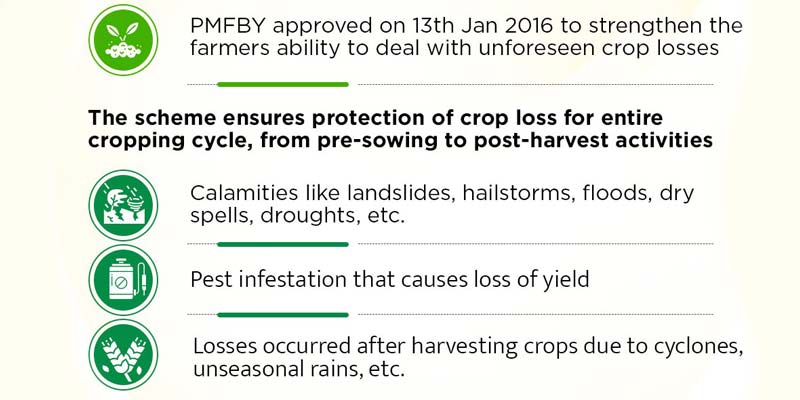 • The average sum insured per hectare has increased from ₹15,100 during the pre-PMFBY Schemes to ₹40,700 under PMFBY.

• As an end to end risk mitigation mechanism for farmers, the scheme extends coverage for the entire cropping cycle from pre-sowing to post-harvest including coverage for losses arising out of prevented sowing and mid-season adversities.

• Individual farm level losses arising out of localized calamities and post-harvest losses are also covered due to perils such as inundation, cloudburst and natural fire. 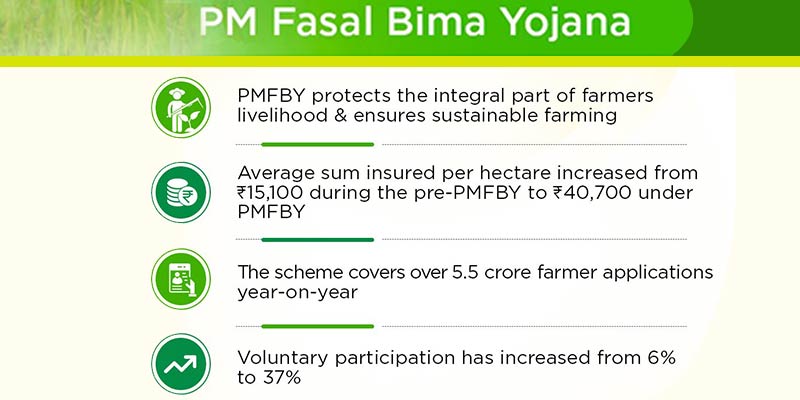 • Some notable examples of these covers include

◦ sowing claims over Rs 500 crore in Andhra Pradesh and Karnataka during the Kharif 2019 dry spell.

◦ claims to the tune of Rs 5000 crore in Maharashtra during the Kharif 2019 unseasonal rainfall. 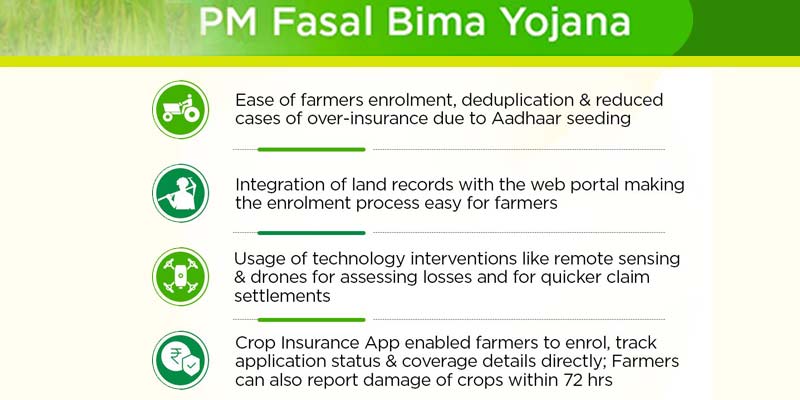 • Other features of the scheme include - Integration of land records with the PMFBY portal, Crop Insurance mobile-app for easy enrollment of farmers and usage of technology such as satellite imagery, remote-sensing technology, drones, artificial intelligence and machine learning to assess crop losses.

• The scheme makes it easier for the farmer to report crop loss within 72 hours of occurrence of any event through the Crop Insurance App, CSC Centre or the nearest agriculture officer.

• As an endeavor to constantly bring about improvements, the scheme was made voluntary for all farmers, post its revamp in February 2020.

• Further the States have also been provided flexibility to rationalize the sum insured so that adequate benefit can be availed by farmers.

• The Scheme covers over 5.5 crore farmer applications year on year.

• Till date, claims worth Rs 90,000 crores have already been paid out under the Scheme.

• Aadhar seeding has helped in speedy claim settlement directly into the farmer accounts.

• Even during COVID lock down period nearly 70 lakh farmers benefitted and claims worth Rs. 8741.30 crores were transferred to the beneficiaries.

• The Government of India urges farmers to take advantage of the scheme by associating themselves to become self-sufficient in times of crisis and support the creation of an Aatmanirbhar Kisan.

Pradhan Mantri Fasal Bima Yojana (PMFBY) was launched from Kharif 2016 with the aim to support production in agriculture by providing an affordable crop insurance product to ensure comprehensive risk cover for crops of farmers against all non-preventable natural risks from pre-sowing to post-harvest stage.

• Stabilizing the income of farmers to ensure their continuance in farming