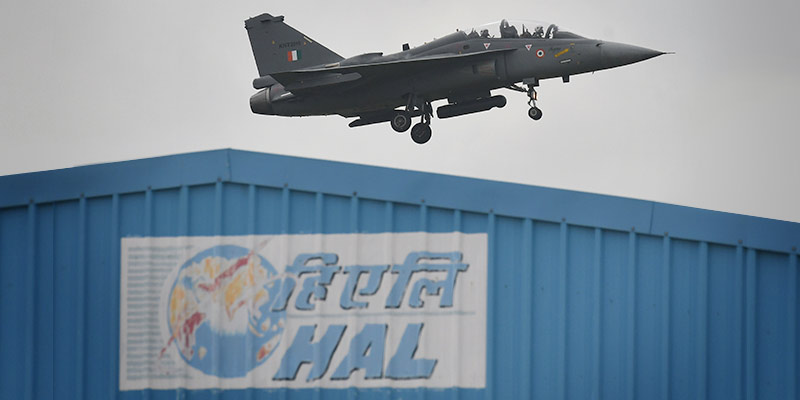 • In a major decision aimed at boosting the domestic aerospace industry, the government approved a much-awaited deal to procure 83 indigenously-developed Light Combat Aircraft (LCA) Tejas for the Indian Air Force.

• The decision to procure the fleet was taken at a meeting of the Cabinet Committee on Security (CCS) chaired by Prime Minister Narendra Modi.

• The aircraft with delta wing is designed for ‘air combat’ and ‘offensive air support’ with ‘reconnaissance’ and ‘anti-ship’ as its secondary roles. Extensive use of advanced composites in the airframe gives a high strength to weight ratio, long fatigue life and low radar signatures.

• The IAF’s first LCA Tejas squadron, Number 45 the Flying Daggers, was raised in 2016.

• The LCA Tejas has successfully completed air-to-air refueling (AAR) trials by mid-air engagement and transferring fuel from fuel tanker aircraft to LCA in 2018. With this, India joined the elite group of countries who have developed the air-to-air refueling system for military class aircraft.

• HAL is the principal partner in the LCA programme with Aeronautical Development Agency (ADA) acting as the programme co-ordinator.

• LCA-Production Group (LCA-PG) was launched in 2002 at HAL as the designated manufacturing unit for manufacturing the indigenously designed 4.5 generation aircraft Tejas being designed by ADA.

• LCA PG was upgraded as a full fledged division of HAL and christened as LCA Tejas Division in Bengaluru Complex in April 2014.

Highlights of the deal

• The government approved procurement of 73 LCA Tejas of Mk-1A variant and 10 LCA Tejas Mk-1 trainer aircraft at the cost of Rs 45,696 crore along with design and development of infrastructure worth Rs 1,202 crore.

• The Tejas Mk-1A will be equipped with active electronically scanned array radar, beyond visual range missile, electronic warfare suite and air-to-air refuelling and would be a potent platform to meet the operational requirements of the IAF.

• The government has also approved infrastructure development by IAF under the project to enable it to handle repairs and servicing at its base depots so that the turnaround time of the aircraft could be reduced and their availability can be increased for “operational exploitation”.

• HAL has already set up second-line manufacturing facilities at its Nasik and Bengaluru divisions, and it will ensure timely deliveries of the jets to the IAF. HAL has already doubled the production capacity of Tejas from eight aircraft per year to 16.

• The Tejas programme would act as a catalyst for transforming the Indian aerospace manufacturing ecosystem into a vibrant, self-sustaining one.

• The defence ministry said combat aircraft has an indigenous content of 50 per cent which will progressively reach 60 per cent by the end of the programme.

• The manufacturing of Tejas by HAL will give a further push to Aatmanirbhar Bharat (self-reliant India) initiative and boost indigenisation of defence production and the defence industry in the country.

• About 500 Indian companies, including MSMEs in the design and manufacturing sectors, will be working with HAL in this procurement.

• The government has been majorly focusing on boosting domestic defence production and set a target of Rs 1.75 lakh crore ($25 billion) turnover in defence manufacturing by 2025.

• In May, Finance Minister Nirmala Sitharaman rolled out a number of reform measures for the defence sector including making separate budgetary outlay to procure Indian-made military hardware, increasing FDI limit from 49 per cent to 74 per cent under the automatic route and generating a year-wise negative list of weapons which won’t be imported.