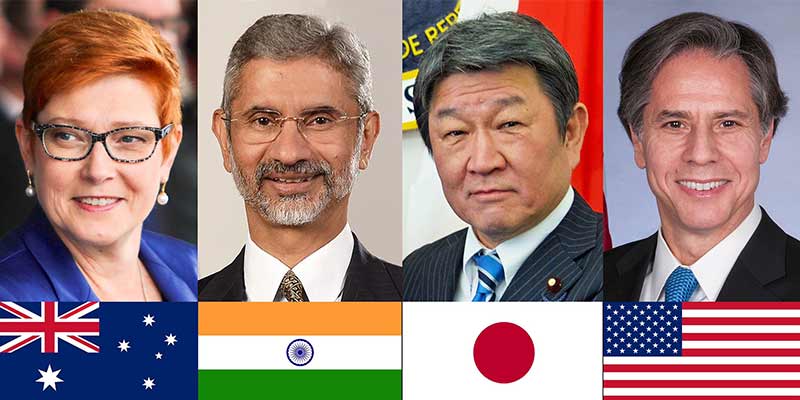 • Foreign ministers of India and three other member nations of the Quad coalition on February 18 vowed to uphold a rules-based international order underpinned by respect for territorial integrity and sovereignty, freedom of navigation and peaceful resolution of disputes.

• The Quad, or the Quadrilateral Security Dialogue, is an informal grouping of four countries — Australia, India, Japan and the United States. It is aimed at ensuring a free and open Indo-Pacific, a strategically vital region that witnessed increasing Chinese military assertiveness in recent years.

• In November 2017, the four countries gave shape to the long-pending proposal of setting up the Quad to develop a new strategy to keep the critical sea routes.

• The foreign ministers of the four countries held their first meeting under the Quad framework in New York in September 2019.

• The evolving situation in the Indo-Pacific region in the wake of China’s increasing military muscle flexing has become a major talking point among leading global powers. The US has been favouring making Quad a security architecture to check China’s growing assertiveness.

• It was the third ministerial meeting of Quad member countries and the first after the Joe Biden administration took charge in Washington.

Highlights of the 3rd ministerial meeting

• The ministers emphasized their commitment to upholding a rules-based international order, underpinned by respect for territorial integrity and sovereignty, rule of law, transparency, freedom of navigation in the international seas and peaceful resolution of disputes.

• Their productive exchange of views on regional issues included a reiteration of their common vision for a free, open and inclusive Indo-Pacific region, with clear support for ASEAN cohesion and centrality. It was noted that the Indo-Pacific concept had gathered growing international support, including in Europe. The 10-nation Association of Southeast Asian Nations (ASEAN) is a key stakeholder in the Indo-Pacific region.

• They discussed ongoing efforts to combat the Covid-19 pandemic, including vaccination programmes. India’s efforts at providing vaccines to 74 countries was recognized and appreciated.

• The ministers exchanged views on responding to climate change and furthering cooperation in areas such as maritime security, humanitarian assistance and disaster relief (HADR), supply chain resilience and counter-terrorism.

• During the discussion on recent developments in Myanmar, the upholding of rule of law and the democratic transition was reiterated by India.