Given that both countries are celebrating the 55th anniversary of the establishment of diplomatic relations, Jaishankar and Shahid reaffirmed their commitment to further deepening and strengthening the relationship, and exploring new areas of cooperation.

This is the second visit of Jaishankar to the Maldives, in his capacity as the minister of external affairs. He last visited the Maldives to take part in the Indian Ocean Conference, held in September 2019.

Guided by mutual respect and trust, the Maldives-India partnership has grown even stronger during the COVID-19 pandemic. The visit highlights the strong and shared commitment of both sides to strengthen the bilateral partnership that is anchored in common civilisational roots, cultural affinities and the shared values of democracy and the rule of law. 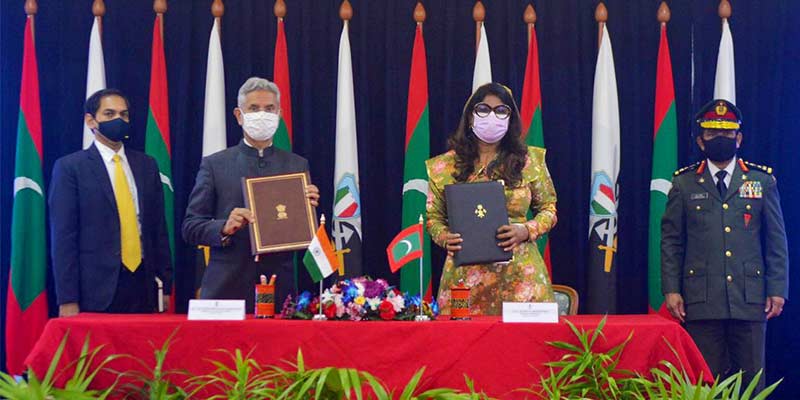 The $50 million Line of Credit agreement for defence projects was signed between the finance ministry of Maldives and the Export Import Bank of India. A Letter of Intent between Fahi Dhiriulhun Corporation and EXIM Bank was also signed towards extending a credit facility under EXIM Bank’s Buyer’s Credit scheme to support the design and construction of 2,000 social housing units in Hulhumale.

Underscoring the importance of defence and security cooperation, Jaishankar and Shahid agreed on the importance of maintaining peace and security in the Indian Ocean Region. They agreed to strengthen coordination in enhancing regional maritime security, including on combating terrorism in all its forms and manifestations, including cross border terrorism and maintaining peace in the region to ensure freedom of navigation in the Indian Ocean.

The agreement will help India to assist the government of Maldives for enhancing the capability of the country’s defence forces in exercising jurisdiction and undertaking maritime surveillance of its Exclusive Economic Zone and islands. It will strengthen Maldivian Coast Guard capability and facilitate regional humanitarian assistance and disaster relief (HADR) efforts.

Jaishankar witnessed the signing of a project execution contract for the construction of roads in Addu, the second-largest urban area in the Maldives, in terms of population.

This is the first of the eight major infrastructure projects being implemented jointly by the Maldives and India to be awarded.

Jaishankar called on Maldivian President Ibrahim Mohamed Solih and reaffirmed India’s fullest commitment as a comprehensive development partner of the island nation during the COVID-19 pandemic and beyond. The minister handed over one lakh additional doses of the COVID-19 vaccine to the Maldives.

The Memorandum of Understanding for the establishment of a Geydhoshu Mas Plant in Noonu Atoll Kendhikulhudhoo was signed during this visit. This is the twelfth project to be financed under the High Impact Community Development Projects scheme.

Other MoUs signed during the visit include cooperation between Public Service Media and Prasar Bharati, and between the ministry of national planning, housing and infrastructure, Maldives, and the ministry of housing and urban affairs, India on Sustainable Urban Development. Both ministers agreed that these MoUs would serve to further strengthen the already strong bilateral cooperation, by expanding into new fields of cooperation.

The resumption of regular scheduled flights between the Maldives and India under the Air Travel Bubble established in August 2020, has enabled increased interaction for mutual benefit and enhanced the close relationship between the two countries despite this pandemic time. Minister Shahid appreciated the establishment of the Air Travel Bubble which enabled the travel of Maldivians to India for medical treatment, despite Indian borders being closed.

The Air Travel Bubble has also enabled an increasing number of Indian tourists to visit the Maldives, making India the number one tourist-source market during 2020 and continuing to occupy the top spot in 2021 so far. Currently, over 45 flights per week are operating between the Maldives and seven destinations in India.