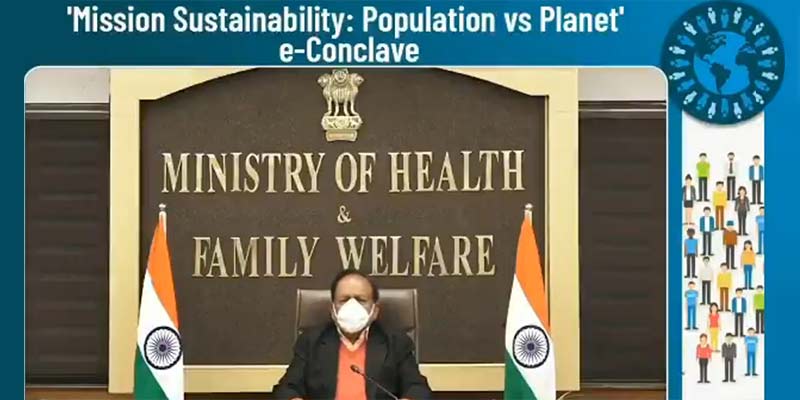 Dr. Harsh Vardhan, Union Minister for Health and Family Welfare participated and expressed his views in WION and Zee Media’s ‘Population versus Planet’ Conference which is a part of its year-long campaign called 'Mission Sustainability: Population Vs Planet'.

This e-conclave marking the campaign’s launch will host deliberations between numerous policy experts, demographic researchers & academicians on socially important themes like population stabilisation, empowering women & youth through education among various others as the world population witnesses an increase from 1 billion in the year 1800 to 7.8 billion today.

• Exhaustive efforts undertaken by India to encourage the adoption of family planning has bearing fruits:

1. India was one of the first countries in the world to formulate a National Family Planning Program way back in 1952.

2. It was later expanded to cover maternal and child health as well as adolescent health and nutrition and has taken giant strides in spreading awareness & enhancing adoption of family planning techniques.

3. Even though India's population has increased from 36 crore in 1951 to 121.02 crore in 2011, the country has witnessed significant decline in both fertility and mortality.

• India has been an important and active member of Family Planning 2020 partnership, advancing collaborative efforts to address the policy, financing, delivery and socio-cultural barriers to women accessing contraceptive information, services and supplies.

• The Partnership helped India add two new contraceptives, namely the Injectable Medroxy Progesterone Acetate (MPA) and Centchroman in the National contraceptive basket while the total allocation for Family Planning during this period was to the tune of 3 billion USD.

• Under Mission Parivar Vikas which was launched in 2016, Family Planning Logistics Management and Information system was developed under the Digital India initiative for ensuring last mile availability of the contraceptives.

• As a result of our persistent efforts on three key fronts of Supplies, Services and Information, India was able to provide modern contraceptive access to 14.2 Crore beneficiaries and thus averting 5.6 Crore unintended pregnancies, 18.6 lakh unsafe abortion and 30 thousand maternal deaths in 2019.”

• Recent National Family Health Survey 5 that bolsters India’s remarkable achievements in Family Planning- 20 out of 22 States surveyed so far have shown an increase in modern contraceptive use and 21 showing a decline in unmet needs for contraception while 19 of them have shown a decline in fertility.

• India is now in a phase of demographic transition with a substantial percentage of youth population with youth in the age group of 15-24 years is projected to decline from 233 million in 2011 to 227 million in 2036.

• Dr. Harsh Vardhan also mentioned that over 9 lakh ASHA workers in the country are the drivers of health and represent the empowered rural women.

• India made remarkable progress in the past by reducing teenage marriages from 47% to 26.8% and teenage fertility from 16% to 7%.