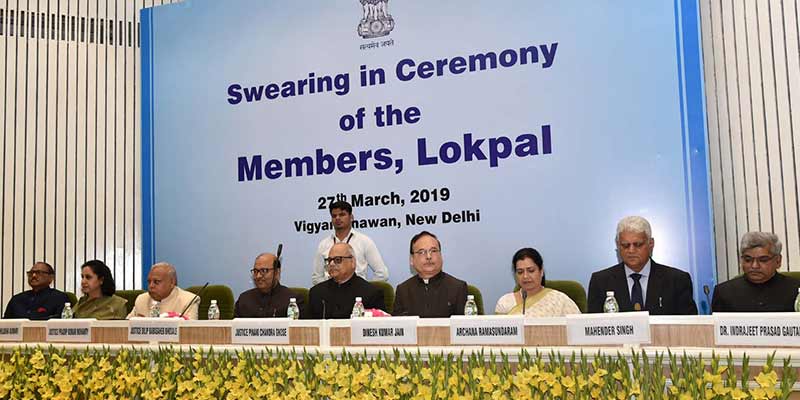 More than two years after the Lokpal came into being, the Centre is yet to appoint a director of inquiry for conducting preliminary inquiry into graft complaints sent by the anti-corruption ombudsman, according to an RTI reply.

“Although director of inquiry has not been appointed by the government, cases are being received in the Commission for conducting preliminary inquiries,” the Central Vigilance Commission (CVC) said in its reply to an RTI query.

• The Lokpal, the apex body to inquire and investigate graft complaints against public functionaries, came into being with the appointment of its chairperson and members in March 2019.

• The Lokpal is the first institution of its kind in independent India, established under the Lokpal and Lokayuktas Act, 2013, to inquire and investigate allegations of corruption against public functionaries who fall within the scope and ambit of the above Act.

• The Lokpal is committed to address concerns and aspirations of the citizens for clean governance. It shall make all efforts within its jurisdiction to serve the public interest and shall endeavor to use the powers vested in it to eradicate corruption in public life.

• The Lokpal has jurisdiction to inquire into allegations of corruption against anyone who is or has been the prime minister, or a minister in the Union government, or an MP, as well as government officials.

• A complaint under the Lokpal Act should be in the prescribed form and must pertain to an offence under the Prevention of Corruption Act, 1988, against a public servant. There is no restriction on who can make such a complaint.

Size of the Lokpal panel

• There is a provision for a chairperson and a maximum of eight members in the Lokpal panel. Of these, four need to be judicial members.

• The chairperson and members shall be appointed by the President after obtaining the recommendations of a selection committee consisting of the Prime Minister, the Speaker of Lok Sabha, the Leader of Opposition in Lok Sabha, the Chief Justice of India or a judge of the Supreme Court nominated by him, one eminent jurist nominated by President based on the recommendation of other members of the panel.

• The chairperson and members of the Lokpal are appointed for a five-year term or till attaining the age of 70.

• President Ram Nath Kovind had on March 23, 2019 administered the oath of office to Justice Pinaki Chandra Ghose as the chairperson of Lokpal.

• At present, the Lokpal has a vacancy of two judicial members.

• According to the Lokpal and Lokayuktas Act, 2013, there shall be a director of inquiry, not below the rank of joint secretary to the government of India, who shall be appointed by the central government for conducting preliminary inquiries referred to the Central Vigilance Commission (CVC) by the Lokpal.

• According to provisions contained under Section 20(1)(b) of the Lokpal and Lokayuktas Act, 2013, complaints in respect of public servants belonging to groups A, B, C or D are referred by the Lokpal to the CVC for a preliminary inquiry.

• The CVC forwards such references to the concerned chief vigilance officer for preliminary inquiry and report.

Provisions for inquiry against the PM

• The Lokpal shall not inquire into any matter connected with the Prime Minister if it relates to international relations, external and internal security, public order, atomic energy and space.

• A full bench of the Lokpal, consisting of its chairperson and all members, has to  consider the initiation of inquiry and at least two-thirds of its members should approve of such inquiry.

• Any such inquiry shall be held in camera and if the Lokpal comes to the conclusion that the complaint deserves to be dismissed, the records of the inquiry shall not be published or made available to anyone.