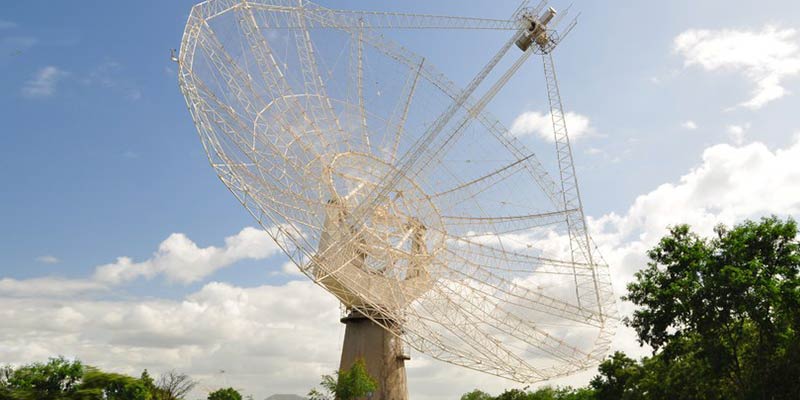 • The GMRT is a radio telescope located at Khodad, 80 km away from Pune, operating over 150-1420 MHz. It consists of 30 antennas, each of 45m diametre, and is operated by the NCRA-TIFR.

• The National Centre for Radio Astrophysics of the Tata Institute of Fundamental Research (NCRA-TIFR) is the premier institute for radio astronomy in India.

• The group of scientists, led by astronomers from NCRA, discovered the rare class of radio stars that are hotter than the Sun with unusually strong magnetic fields and much stronger stellar wind.

• The NCRA said the team had also discovered three more such stars in the past using the GMRT. Thus, of the total 15 MRPs known so far, 11 were discovered with the GMRT, of which eight were discovered in 2021 alone, thanks to the wide bandwidth and high sensitivity of the upgraded GMRT.

• The success of the GMRT programme has revolutionised the notion about this class of stars, and has opened up a new window to study their exotic magnetospheres.

• The MRPs are stars hotter than the Sun with unusually strong magnetic fields, and much stronger stellar wind. Due to this, they emit bright radio pulses like a lighthouse.

• Though the first MRP was discovered in 2000, it was only due to the high sensitivity of the upgraded GMRT (uGMRT) that the number of such stars known have increased multiple times in recent years, with 11 of the 15 discovered using the high-tech telescope.

• The success of the survey with the uGMRT suggests that the current notion that MRPs are rare objects may not be correct. Rather, they are probably more common, but are difficult to detect.

• This is due to the fact that the radio pulses are visible only at certain times, and the phenomenon is mostly observable at low radio frequencies.

• This is the frequency range where the uGMRT stands out as the most sensitive telescope in the world. The high sensitivity of the uGMRT and its ability to make high resolution images were instrumental in enabling the recovery of the pulsed signal from the different types of radiation coming from the sky.

• This, combined with a strategic observation campaign, allowed the astronomers to overcome the difficulties, and reveal the true nature of these objects.

• The study with the uGMRT allowed them to find that the magnetic field and temperature are two quantities that appear to play the major role in deciding how intense the radio pulse will be.

• A research paper describing these new results was recently accepted for publication in ‘The Astrophysical Journal’. Its lead author Barnali Das recently completed PhD thesis, working under the supervision of Prof Poonam Chandra at the NCRA.

• Das and Prof Chandra have been actively involved in various projects aimed at the characterisation of this little known class of objects MRPs. In fact, the name MRP was introduced by them in 2020.