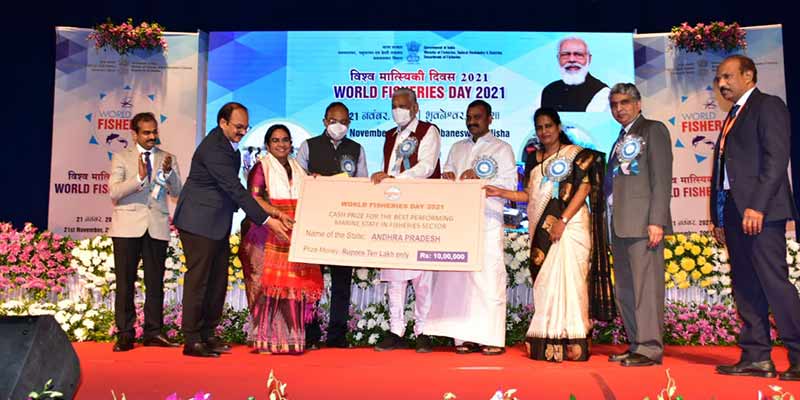 • Telangana was adjudged best performer in inland fisheries, while Andhra Pradesh was named the best marine state in the country by the Centre.

• Union Minister Parshottam Rupala announced the awards at a programme to celebrate World Fisheries Day in Bhubaneswar on November 21. Rupala said that the Centre has set a target of achieving Rs 1 lakh crore export from the sector by 2024-25.

• Balasore in Odisha was named the best marine district, and Balaghat in Madhya Pradesh received the award for the best district in inland fisheries.

• The award for the best hilly and northeastern state in the sector was given to Tripura.

• Bongaigaon in Assam received the award in this category for being the best district.

• India is one of the largest fish producing countries in the world.

• Providing livelihoods to an estimated 28 million fishers and fish farmers, the sector offers immense opportunities for employment generation, especially for youth and women, and for meeting the food and nutritional security and foreign exchange earnings.

• During 2018-19, the sector’s Gross Value Added (GVA) was Rs 2,12,915 crore at current prices, which was about 1.24 per cent of the national GDP and 7.28 per cent of the GVA from the agriculture and allied sector. During the same period, the sector earned foreign exchange worth Rs 46,589 crore by exporting 13.92 lakh tonnes of marine products.

• Fisheries and aquaculture remain an important source of food, nutrition, employment and income for millions, especially the rural populations.

• Fish being an affordable and rich source of animal protein, is one of the healthiest options to mitigate hunger and nutrient deficiency.

• It is a flagship scheme for focused and sustainable development of fisheries sector in the country with an estimated investment of Rs 20,050 crore for its implementation during a period of five years from FY 2020-21 to FY 2024-25 in all states/Union Territories, as a part of Atmanirbhar Bharat Package.

• The investment of Rs 20,050 crore under PMMSY is the highest ever in the fisheries sector. Out of this, an investment of about Rs 12,340 crore is proposed for beneficiary-oriented activities in marine, inland fisheries and aquaculture and about Rs 7,710 crore investment for fisheries infrastructure.

• PMMSY is designed to address critical gaps in the fisheries value chain from fish production, productivity and quality to technology, post-harvest infrastructure and marketing. It aims to modernise and strengthen the value chain, enhance traceability and establish a robust fisheries management framework while simultaneously ensuring the socio-economic welfare of fishers and fish farmers.

a) Enhancement of production and productivity

b) Infrastructure and post-harvest management

Anticipated outcomes on account of implementation of PMMSY are:

b) A sustained average annual growth of about 9 per cent in fish production is expected.

e) Enhancement of productivity in aquaculture from the present national average of 3 tonnes to about 5 tonnes per hectare.

f) Reduction of post-harvest losses from the reported 20-25 per cent to about 10 per cent.

g) Doubling of incomes of fishers and fish farmers.

i) Enhancement of the domestic fish consumption from about 5 kg to about 12 kg per capita.