Dec 26 to be observed as ‘Veer Baal Diwas’ 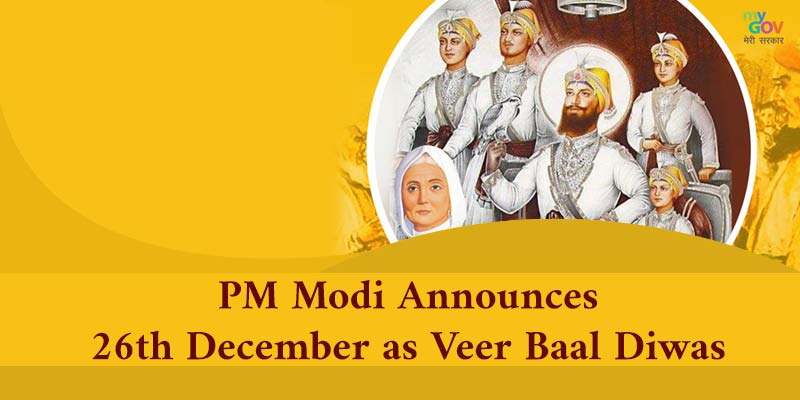 • Prime Minister Narendra Modi announced that December 26 will be observed as ‘Veer Baal Diwas’ as a tribute to the 10th Sikh Guru Gobind Singh’s four sons who were executed by the Mughals.

• Modi’s announcement came on the day of the birth anniversary of the Sikh guru.

• Following the announcement, the Union home ministry issued a notification.

• In a gazette notification, the home ministry said that the people of India, while celebrating ‘Azadi Ka Amrit Mahotsav’, salute Sahibzada Zorawar Singh and Sahibzada Fateh Singh, younger sons of the tenth Sikh Guru for their supreme and unparalleled sacrifice on December 26, 1705 at the tender age of 9 and 6 years respectively to defend the dignity and honour of Sikhism.

• It declared December 26 as ‘Veer Baal Diwas’ as a tribute of the grateful nation to the great valour and supreme sacrifice of Sahibzada Zorawar Singh and Sahibzada Fateh Singh in their quest for justice.

• The tenth Sikh Guru, Guru Gobind Singh fought against Mughal Emperor Aurangzeb, due to which he bore the wrath of the Dynasty.

• Sahibzada Zorawar Singh and Sahibzada Fateh Singh were told by Wazir Khan, the Nawab of Sirhind, to be bricked alive, after they had refused to convert to Islam.

• When Mata Gujri came to know about this she also collapsed in this place.

• The place where the two children of Guru Gobind Singh were bricked alive is known as Fatehgarh Sahib.

• The two older princes died in the Battle of Chamkaur.

• The sanctuary containing the historic wall is known as Gurudwara Bhora Sahib.

Dec 26 to be observed as ‘Veer Baal Diwas’
COPY LINK