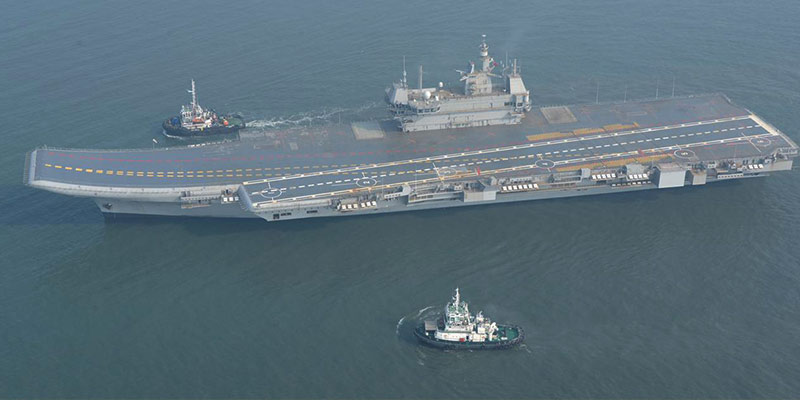 India’s first indigenous aircraft carrier (IAC) Vikrant began another set of sea trials on January 9 to carry out complex manoeuvres in high seas ahead of its planned induction in August.

The 40,000-tonne aircraft carrier, the largest and most complex warship to be built in India, successfully completed a five-day maiden sea voyage in August and underwent 10-day sea trials in October.

While the maiden sea trials were to establish propulsion, navigational suite and basic operations, the second sea trial witnessed the ship being put through its paces in terms of various machinery trials and flight trials.

Several scientists from the Naval Science and Technological Laboratory, a DRDO facility based at Visakhapatnam, are witnessing the third phase of sea trials of Vikrant.

The warship has been built by Cochin Shipyard Limited (CSL).

• An aircraft carrier is a warship designed to support and operate aircraft, engaged in attacks on targets afloat or ashore and to undertake sustained operations in support of other forces.

• An aircraft carrier is central to the operational requirements and fleet doctrine of the Indian Navy and is the only means of ensuring air defence of sea.

• India next acquired HMS Hermes, a Centaur class STOVL (Short Take-off and Vertical Landing) carrier  and a veteran of the Falkland War. INS Viraat was commissioned on May 12, 1987 as India’s second aircraft carrier and India’s first STOVL carrier operating the Sea Harrier aircraft.

• Soon after the acquisition of INS Viraat, INS Vikrant was also converted from a CATOBAR carrier to a STOVL carrier.

• INS Vikrant was decommissioned in January 1997.

• INS Viraat was decommissioned in 2017.

• At present, India has only one aircraft carrier — INS Vikramaditya.

• The warship has been built at a cost of around Rs 23,000 crore and its construction propelled India into a select group of countries having capabilities to build state-of-the-art aircraft carriers.

• Vikrant, with more than 76 per cent indigenous components, is expected to be commissioned into the Indian Navy by August this year.

• The ship has been designed with a very high degree of automation for machinery operation, ship navigation and survivability.

• The warship, which will operate MiG-29K fighter jets, Kamov-31 helicopters, MH-60R multi-role helicopters, has over 2,300 compartments, designed for a crew of around 1,700 people, including specialised cabins to accommodate women officers.

• It would offer an incomparable military instrument with its ability to project Air Power over long distances, including Air Interdiction, Anti-Surface Warfare, offensive and defensive Counter-Air, Airborne Anti-Submarine Warfare and Airborne Early Warning.

• Vikrant has a top speed of around 28 knots and cruising speed of 18 knots with an endurance of about 7,500 nautical miles.

• The ship can accommodate an assortment of fixed-wing and rotary aircraft.