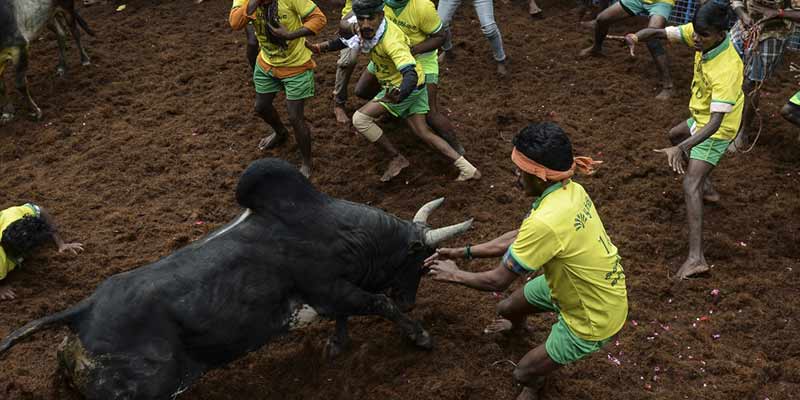 The Tamil Nadu government has permitted the conduct of Jallikattu, a popular traditional bull-taming sport in the state, during the Pongal festival with stringent COVID-19 safety norms in place.

• Jallikattu is a Tamil word, which comes from the term “Callikattu”, where “Calli” means coins and “Kattu” means a package. Jallikattu refers to silver or gold coins tied on the bulls’ horns. People, in the earlier time, used to fight to get at the money placed around the bulls’ horns which was depicted as an act of bravery. Later, it became a sport conducted for entertainment and was called “Yeruthu Kattu”, in which a fast moving bull was corralled with ropes around its neck.

• Started as a simple act of bravery, later, assumed different forms and shapes like Jallikattu (in the present form), bull race, etc which is based on the concept of flight or fight. Jallikattu includes Manjuvirattu, Oormaadu, Vadamadu, Erudhu, Vadam, Vadi and all such events involve taming bulls.

• In 2011, the central government added bulls to the list of animals whose training and exhibition were prohibited.

• In May 2014, the Supreme Court in its judgment said that bulls cannot be used as performing animals, either for Jallikattu events or bullock-cart races in the states of Tamil Nadu, Maharashtra or elsewhere in the country and banned their use across the country.

• The apex court had declared Tamil Nadu Regulation of Jallikattu Act, 2009 as constitutionally void, being violative of Article 254(1) of the Constitution.

• In February 2018, the Supreme Court referred the pleas related to Jallikattu to a five-judge Constitution bench which would decide if the bull-taming sport fell under cultural rights or perpetuated cruelty to animals.