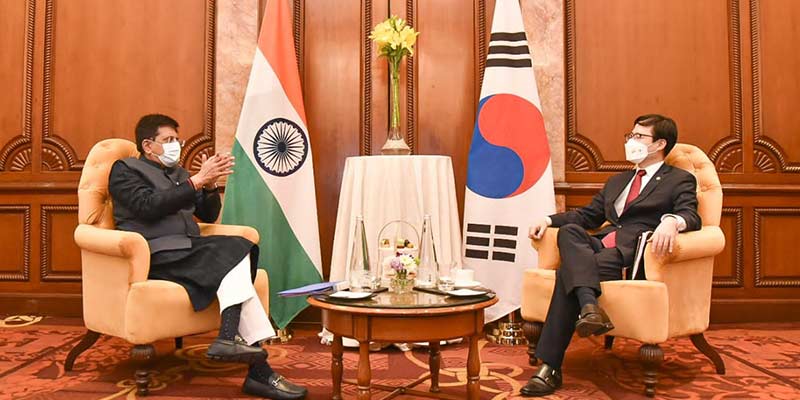 • India flagged market access issues being faced by domestic players from several sectors such as steel, engineering and agri products in Korea and sought redressal of the matter with a view to boost bilateral trade ties.

• The issue was raised during the meeting between Commerce and Industry Minister Piyush Goyal and Korean Trade Minister Yeo Han-koo.

• The ministers agreed to impart fresh momentum to the discussions on Comprehensive Economic Partnership Agreement (CEPA) upgradation negotiations and also promote extensive B2B interactions on trade and investment between the industry leaders of the two countries.

• India-Republic of Korea (RoK) relations has made great strides in recent years and has become truly multidimensional, spurred by a significant convergence of interests, mutual goodwill and high level exchanges.

• Bilateral consular relations were established in 1962 which was upgraded to ambassador-level in 1973.

• India played an important and positive role in Korean affairs after Korea’s independence in 1945. K.P.S. Menon was the chairman of the nine-member UN Commission set up in 1947 to hold elections in Korea. During the Korean War (1950-53), both the warring sides accepted a resolution sponsored by India, and the ceasefire was declared on July 27, 1953.

• Lt. General K.S. Thimayya of India, served as the chairman of the Neutral Nations Repatriation Commission (NNRC), after the armistice and contributed to resolving the humanitarian issues arising out of the War, which won appreciation from all quarters.

• Both the countries implemented the Comprehensive Economic Partnership Agreement (CEPA), a kind of free-trade pact, in January 2010.

• Trade and economic relations gathered momentum following the implementation of CEPA in 2010.

• In May 2015, the bilateral relationship was upgraded to ‘Special Strategic Partnership’.

• India and South Korea launched an initiative ‘Korea Plus’, as proposed by PM Modi in June 2016 in India to promote and facilitate Korean Investments in India.