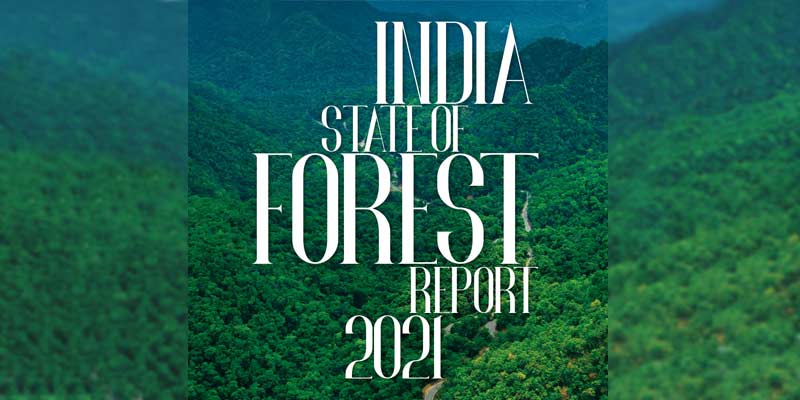 India’s forest and tree cover has risen by 2,261 square kilometers in the last two years with Andhra Pradesh growing the maximum forest cover of 647 square kilometers, according to the India State of Forest Report (ISFR) 2021.

The biennial report by the Forest Survey of India (FSI), an assessment of the country’s forest resources, was released by Union Environment Minister Bhupender Yadav.

Forest Survey of India (FSI), which was established in 1981, is an organisation under the ministry of environment, forest and climate change and its headquarters is situated in Dehradun. Its principal mandate is to conduct survey and assessment of forest resources in the country.

National Forest Policy, 1988 envisages a goal of achieving 33 per cent of the geographical area of the county under forest and tree cover.

Forest cover refers to the extent of land area that is covered by forest resources in the country. Forest Survey of India (FSI) initiated assessment of forest cover of the country for the first time in 1987. Since then, wall-to-wall Forest Cover Mapping (FCM) of the country has been carried out using remote sensing based methodology at biennial intervals.

All lands more than one hectare in area, with a tree canopy density of more than 10 per cent, including tree orchards, bamboo, palms, etc occurring within recorded forest and other government lands, private community or institutional lands, are included in the assessment of forest cover.

The minister revealed that the total tree-and-forest cover in the country includes an increase of 1,540 square kilometres of forest cover and 721 sq km of tree cover compared to the 2019 report. 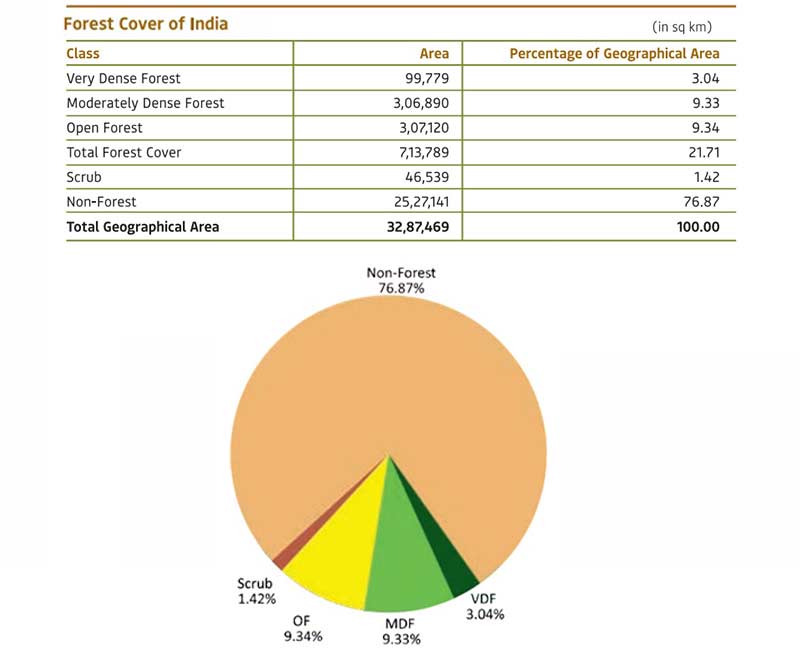 Highlights of the report:

• According to the report, India’s total forest and tree cover is now spread across 80.9 million hectares, which is 24.62 per cent of the geographical area of the country.

• The gain in forest cover or improvement in forest canopy density may be attributed to better conservation measures, protection, afforestation activities, tree plantation drives and agroforestry.

• Area-wise, Madhya Pradesh has the largest forest cover in the country followed by Arunachal Pradesh, Chhattisgarh, Odisha and Maharashtra.

• The northeast did not show positive results as the current assessment showed a decrease of forest cover to the extent of 1,020 sq km in the region.

• The report said 17 states/UTs have above 33 per cent of the geographical area under forest cover.

• Out of these states and UTs, Lakshadweep, Mizoram, Andaman & Nicobar Islands, Arunachal Pradesh and Meghalaya have more than 75 per cent forest cover, while 12 states/UTs (Manipur, Nagaland, Tripura, Goa, Kerala, Sikkim, Uttarakhand, Chhattisgarh, Dadra & Nagar Haveli and Daman & Diu, Assam, Odisha) have forest cover between 33 per cent to 75 per cent.

• The annual increase in the carbon stock is 39.7 million tonnes.

• The FSI, in collaboration with Birla Institute of Technology and Science (BITS) Pilani, Goa Campus also performed a study based on ‘Mapping of Climate Change Hotspots in Indian Forests’ as part of the report.

• The collaborative study was carried out with the objective to map the climatic hotspots over the forest cover in India, using computer model-based projection of temperature and rainfall data, for the three future time periods, that is, years 2030, 2050 and 2085.