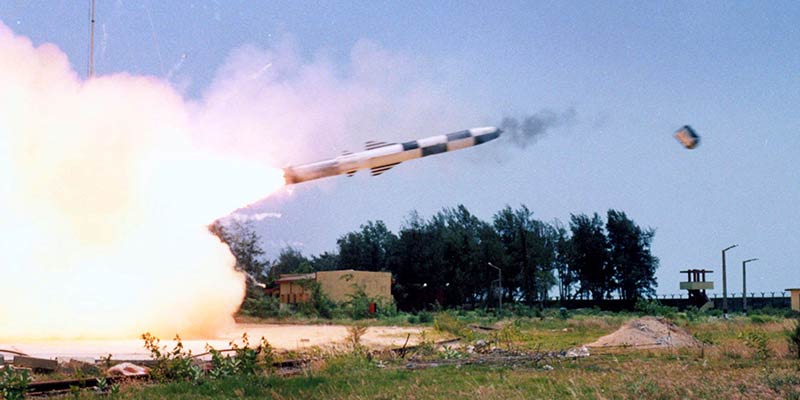 The Philippines has given a $374.9 million contract to BrahMos Aerospace to supply shore-based anti-ship missiles for the country’s navy.

• BrahMos is a universal long range supersonic cruise missile system that can be launched from land, sea and air. BrahMos has been jointly developed by the Defence Research and Development Organisation (DRDO) and NPOM, Russia.

• It operates on fire-and-forget principle, adopting varieties of flights on its way to the target. Its destructive power is enhanced due to large kinetic energy on impact.

Significance of the deal

• The Philippines became the first country in the region to acquire the BrahMos cruise missile system jointly developed by India and Russia. The ripples for this deal,years in the making, are likely to be felt for a while.

• The deal is worth $374.9 million and is a significant step forward for India as a regional security provider as well as a defence exporter. The Philippines is not the only country interested in the missile system. Vietnam, Indonesia and Thailand, too, have shown interest. India hopes that there will be exports to the UAE, too.

• For India, the deal does more than just bolster its capability image as a defence exporter, it is also a strategic signal to China. Especially since the missile system will be used by the Philippines to defend itself against China.

• Philippines’ acquisition of the missile system is an assertion of its strength. Of late, the country has been adding to its military strength in a region that is steadily becoming more volatile. As many as 15 Black Hawk helicopters were bought last year.

• In 2020, Minister of State for Defence Shripad Naik, in a written reply to Rajya Sabha, stated that India was exporting military equipment to 42 countries, including Azerbaijan, Seychelles, Estonia, Indonesia, Guinea, Singapore and Germany.

• India was exporting mortar shell covers to Israel, night-vision binoculars to Thailand, sleeping bags to Guinea, bullet-proof helmets, bomb-suppression blankets and soft armour panels to Germany, hard-armour plates to the Netherlands and the US. Exports to Qatar, Lebanon, Iraq, Uruguay, Japan and Egypt were also in the protective body equipment category.

This article originally appeared in The Week.