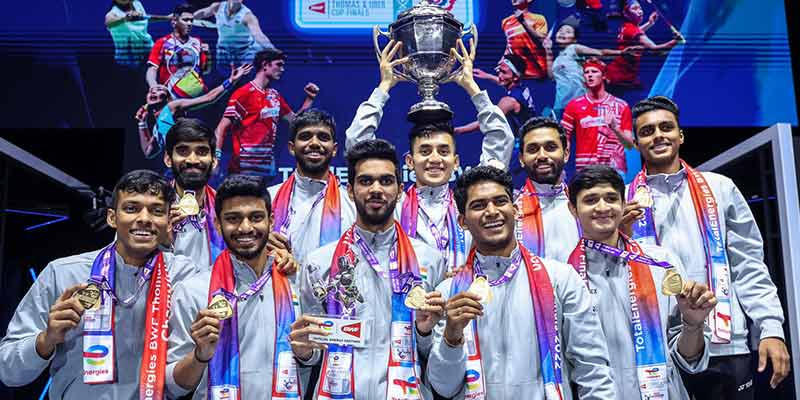 • India’s men’s badminton team made history by winning the Thomas Cup for the first time with a ruthless 3-0 upset of reigning champions Indonesia in Bangkok on May 15.

• Lakshya Sen, Kidambi Srikanth and doubles players Chirag Shetty and Satwiksairaj Rankireddy delivered when it mattered the most as they stunned the 14-time champions to win the prestigious team championship for the first time ever.

• Lakshya Sen set the tone for the first-time finalists when he stunned Olympic bronze medallist Anthony Sinisuka Ginting in the first singles with a come-from-behind 8-21, 21-17, 21-16 win.

• The doubles pair of Satwiksairaj Rankireddy and Chirag Shetty then showed nerves of steel as it saved four match points in the second game to eventually outwit Mohammad Ahsan and Kevin Sanjaya Sukamuljo 18-21, 23-21, 21-19.

• The Indian team sealed the title when Kidambi Srikanth defeated Jonatan Christie 21-15, 23-21 in the second singles.

• India became only the sixth nation to win the coveted trophy.

• The Thomas Cup is the prize awarded for the World Men’s Team Championships. Its name honours Sir George Thomas, founder-president of the International Badminton Federation (now Badminton World Federation), who was keen that badminton should have its own version of the Davis Cup in tennis.

• Indonesia is the most successful team, having won 14 times. China is second with 10. In 2016, Denmark became the first non-Asian country to win the Thomas Cup.

• Uber Cup is the prize for the World Women’s Team Championships. It was proposed in 1950 by England’s great pre-War player Betty Uber (supported by New Zealand’s Nancy Fleming), and eventually came into being in 1956-57.

• China is the most successful team in the Uber Cup with 15 titles. Japan is second, having won it six times. 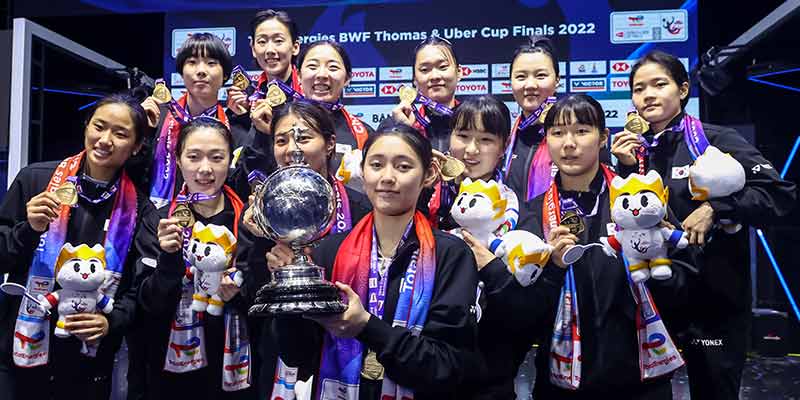 • South Korea’s women’s team ended their 12-year wait for an Uber Cup title with a 3-2 upset of defending champions China on May 14.

• Powerhouses China were looking for their 16th title in the biennial women’s team competition, while South Korea’s previous triumph came in 2010 in Kuala Lumpur, Malaysia.

• China took the lead through reigning Olympic champion Chen Yufei, who overcame an ankle injury scare and saved three match points against An Se-young to prevail 17-21, 21-15, 22-20.

• The doubles world No.2 pairing of Lee So-hee and Shin Seung-chan levelled the tie for South Korea, finding their form after a shaky start to snatch a 12-21, 21-18, 21-18 victory against top-ranked duo Chen Qingchen and Jia Yifan.