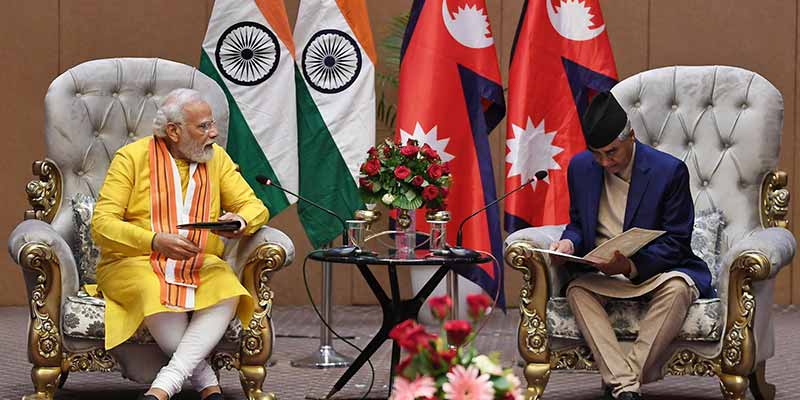 • Prime Minister Narendra Modi paid an official visit to Lumbini at the invitation of his Nepalese counterpart Sher Bahadur Deuba on the occasion of Buddha Purnima.

• Lumbini, located in the Terai plains of southern Nepal, is one of the holiest places of Buddhism, as Lord Buddha was born here.

• As Prime Minister, this was Modi’s fifth visit to Nepal.

• Deuba was in Delhi last month in his first bilateral visit abroad after becoming Prime Minister for the fifth time in July 2021.

• Nepal is important for India in the context of its overall strategic interests in the region.

• The landlocked Himalayan nation shares a border of over 1,850 kms with five Indian states — Sikkim, West Bengal, Bihar, Uttar Pradesh and Uttarakhand. Nepal relies heavily on India for the transportation of goods and services.

• Both leaders held a bilateral meeting, during which they followed up on their discussions held on April 2 in New Delhi. They discussed specific initiatives and ideas to further strengthen cooperation in various sectors, including culture, economy, trade, connectivity, energy and development partnership.

• The two sides agreed in principle to establish sister city relations between Lumbini and Kushinagar, which are among the holiest sites of Buddhism and reflect the shared Buddhist heritage between the two countries.

• Noting that lakhs of devotees from all over the world come to these places every year, Modi said the two governments have taken decisions like creating integrated check posts in Bhairahawa and Sonauli, which will facilitate the movement of people on the border.

• Modi said it was decided to establish Dr.Ambedkar Chair for Buddhist Studies in Lumbini Buddhist University. 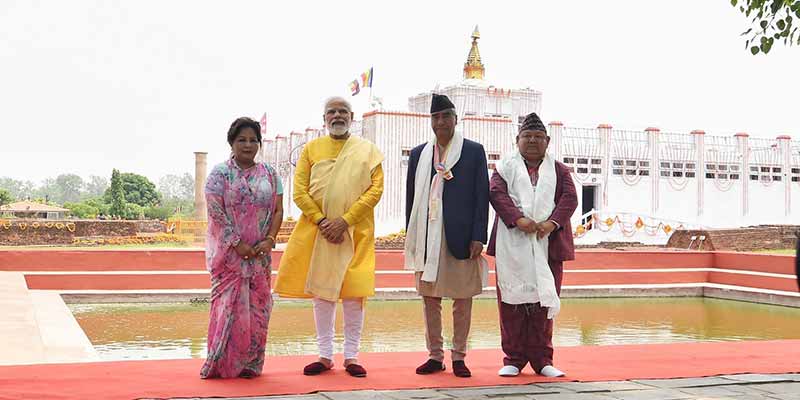 • Modi and Deuba visited the Maya Devi temple in Lumbini. At the temple, the Prime Ministers attended prayers conducted as per Buddhist rituals and made offerings. They visited the historical Ashoka Pillar, which carries the first epigraphic evidence of Lumbini being the birthplace of Lord Buddha.

• They participated in a special event to mark the 2566th Buddha Jayanti celebrations at the International Convention Center and Meditation Hall in Lumbini. 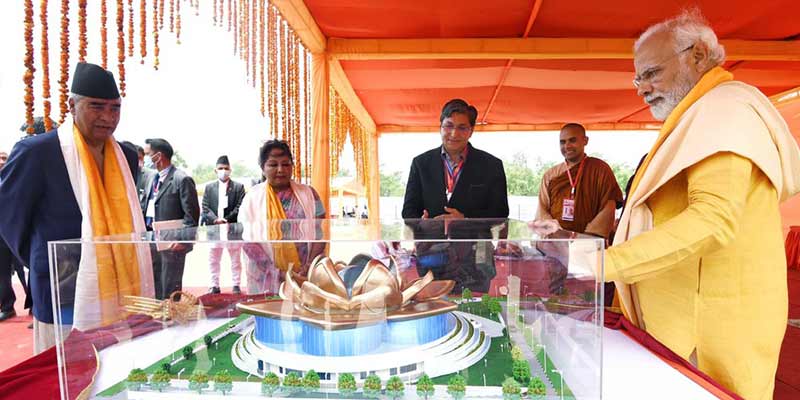 • Modi and Deuba participated in the foundation stone laying ceremony (shilanyas) for the construction of India International Centre for Buddhist Culture and Heritage in the Lumbini Monastic Zone.

• The Centre will be constructed by the International Buddhist Confederation (IBC), New Delhi, on a plot allocated to IBC by the Lumbini Development Trust (LDT), under an agreement between IBC and LDT signed in March 2022.

• After the foundation stone laying ceremony, which was performed by monks belonging to three major Buddhist traditions — Theravada, Mahayana and Vajrayana, the two PMs also unveiled a model of the Centre.

• Once completed, the Centre will be a world-class facility welcoming pilgrims and tourists from all over the world to enjoy the essence of spiritual aspects of Buddhism. It will be a modern building, ‘net zero’ compliant in terms of energy, water and waste handling, and will house prayer halls, meditation centers, library, exhibition hall, cafeteria, offices and other amenities.

• An MoU for the development of the 490 MW Arun-4 hydro electric project in Nepal has been signed by SJVN and Nepal Electricity Authority (NEA) in Lumbini, Nepal.

• It will be the third mega project to be constructed by the company in Nepal. The construction of 900 MW Arun-3 project is in progress and the 669 MW Lower Arun project is at the survey and investigation stage.

• With this, SJVN has three projects with a total capacity of 2,059 MW in Nepal.

• The 490 MW, Arun-4 hydro electric project will be developed as a joint venture by SJVN and NEA, wherein the former will have the majority stake.

• The project will generate around 2,100 million units of energy per annum. The estimated developmental cost of the project, which is situated in Sankhuwasabha District Province-1 of Nepal, is Rs 4,900 crore.

• The Integrated River Basin Development Approach enables optimum utilisation of manpower, infrastructure and financial resources. This concept — which will help in allocation of hydro projects in one single river basin to one developer — has been accepted by the Nepal government as well as by the state governments of Himachal Pradesh and Arunachal Pradesh.

• In addition to the three hydro projects in Nepal, SJVN is also constructing a 217-km 400 kV associated transmission system for evacuation of power.