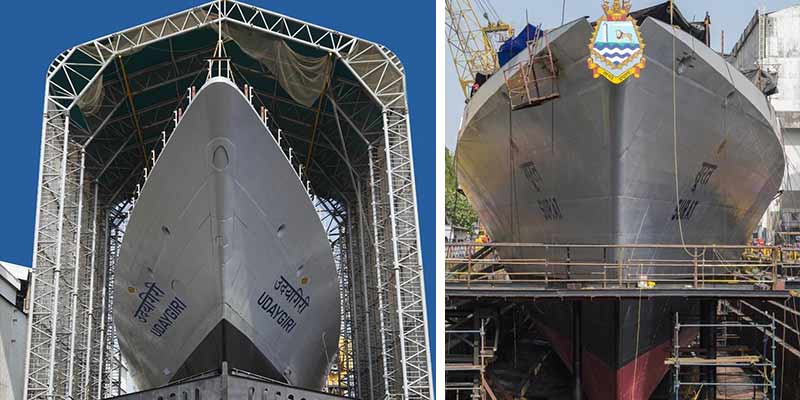 • Defence Minister Rajnath Singh launched two indigenously built warships — Surat and Udaygiri — at the Mazagon Docks in Mumbai. The launch refers to a ship entering water for the first time.

• This is the first time that the two indigenously built warships have been launched concurrently.

• The ship Surat is the fourth and last of the stealth destroyers under the Project 15B programme. The second ship, Udaygiri, is part of the Project 17A frigate programme.

• Both 15B and P17A ships have been designed in-house by the Directorate of Naval Design.

Project 15B class of ships

• The Project 15B class of ships are the next generation stealth guided missile destroyers of the Indian Navy being built at the Mazgaon Docks Ltd, Mumbai.

• The contract for four ships of Project 15B, as the Visakhapatnam class ships are known, was signed in January 2011. This project is a follow-on of the Kolkata class (Project 15A) destroyers commissioned in the last decade.

• The four ships are named after major cities of the country — Visakhapatnam, Mormugao, Imphal and Surat.

• INS Visakhapatnam, the lead ship of Project 15B stealth guided missile destroyers being built at Mazgaon Docks Limited (MDL), was commissioned into the Indian Navy on November 21, 2021.

• The second and third ships have been launched and are at different stages of outfitting/trials.

• Surat is the fourth ship of Project 15B destroyers which heralds a significant makeover of the P15A destroyers and is named after the commercial capital of the state of Gujarat and also the second largest commercial hub of western India after Mumbai.

• Surat city has a rich maritime and shipbuilding history and vessels built in the 16th and 18th centuries were known for their longevity.

• Surat ship has been built using the block construction methodology which involved hull construction at two different geographical locations and has been joined together at MDL, Mumbai.

• Under the Project 17A programme, a total of seven ships — four at Mazagon Dock Shipbuilders Limited (MDL) and three ships at Garden Reach Shipbuilders and Engineers Limited (GRSE), Kolkata — are being built with enhanced stealth features, advanced indigenous weapon and sensor fit along with several other improvements.

• INS Nilgiri, the first of the seven stealth frigates, was launched in September 2019.

• The ship Udaygiri is named after a mountain range in the state of Andhra Pradesh.

• It is the third ship of Project 17A frigates.

• The new warship is the reincarnation of the erstwhile Udaygiri, the Leander Class ASW Frigate, which saw numerous challenging operations in its illustrious service to the country, spanning over three decades from February 1976 to August 2007.