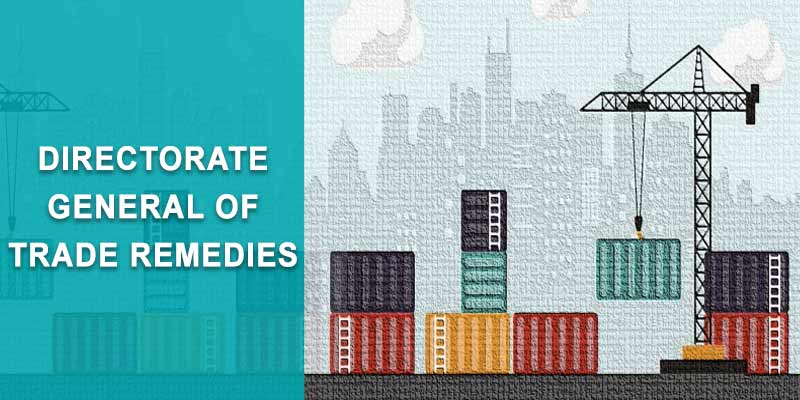 The Directorate General of Trade Remedies (DGTR) has initiated several systemic and procedural changes for improving the ease of doing business and reducing the compliance burden on stakeholders.

This has been achieved through an extensive exercise towards simplification of rules, processes and procedures relating to trade remedy.

• It was earlier known as Directorate General of Anti-dumping and Allied Duties (DGAD). In May 2018, following the amendment to the Government of India (Allocation of Business) Rules, 1961, DGTR substituted the DGAD.

• DGTR also provides trade defence support to our domestic industry and exporters in dealing with increasing instances of trade remedy investigations instituted against them by other countries.

• These trade remedy measures are part of coordinated efforts in boosting the global competitiveness of domestic industry by promoting sustainable economic growth to facilitate new investments and create more jobs by removing obstacles to investment and providing a level playing field in the domestic industry.

• The Directorate has also created a Trade Defence Wing to assist the exporters of the country in defending the trade remedy investigations initiated by other WTO member countries against India.

Anti-Dumping Duty: Duty imposed against imported goods, when the export price of the imported goods is lower than the normal value of the goods in the domestic market of the exporting country and there is a causal link between the dumping and injury suffered by the competing domestic industry in the country of import.

Counter-vailing Duty: Duty imposed to offset the unfair advantage to exports on account of subsidy policies, rules, and regulations by the government of exporting countries, if, such subsidised imports are causing injury to the domestic industry of the importing member country.

Safeguard Duty: Duty imposed on imported goods to prevent injury or threat of injury to the domestic industry of the importing country from a sudden surge of imports. The Safeguard duties are applicable to all exporting countries irrespective of the origin of the product.

Safeguard Quantitative Restrictions: SQRs are remedial measures taken in the form of quantitative restrictions applied on import of goods to prevent injury/threat of injury to domestic industry of the importing country due to a sudden surge in imports. QRs are applicable against exports from all exporting countries irrespective of the origin of the products.

• These duties help provide a level-playing field to the domestic industry against the unfair trade practices like dumping, subsidisation and surge in imports.

• Measures taken by DGTR include simplified formats and questionnaires to be filed by producers/exporters, importers, users and domestic industry in trade remedy investigations.

• For handholding of Indian industries, especially MSME’s, DGTR has introduced a procedure of sampling for domestic producers in fragmented industry in anti-dumping/ countervailing duty investigation.

• The level-playing field provided by the government based on recommendations made by DGTR enabled a large number of industries in capacity additions, significant direct and indirect employment protection and generation.

• The Trade Defence Wing of DGTR has been proactively engaged in defending the interests of Indian exporters in investigations conducted by other countries against Indian exports. Consultations with investigating authorities of other countries, particularly the US and European Union authorities, are regularly held to explain, reiterate and drive home the Indian standpoint.

• Online portal titled ARTIS (Application for Remedies in Trade for Indian industry and other Stakeholders) was launched to facilitate online filing of applications for trade remedies, and was partly operationalized for original and sunset review application.

• A helpdesk and facilitation centre has been operationalised in DGTR to assist the domestic industry, especially MSME sector, in filing applications and creating awareness regarding access to the available trade remedy measures.