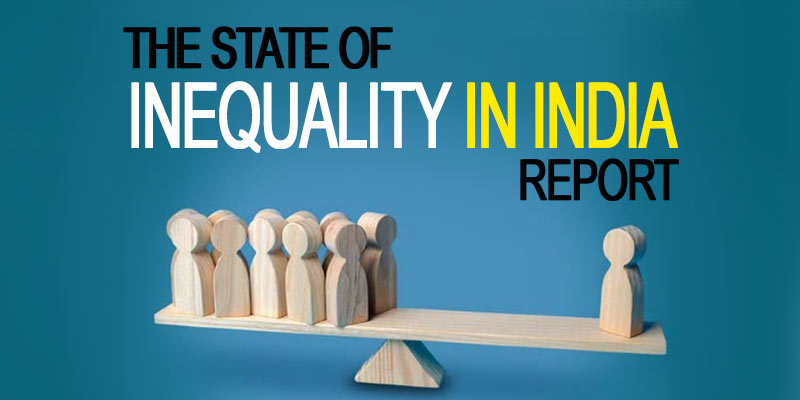 The Economic Advisory Council to the Prime Minister (EAC-PM) suggested that the government should come out with a guaranteed employment scheme for the urban unemployed as well as introduce a universal basic income and allocate higher funds towards the social sector to reduce inequality in India.

The report titled ‘The State of Inequality in India’, commissioned by the EAC-PM, was prepared by the Institute for Competitiveness. It was released by EAC-PM chairman Bibek Debroy.

Economic Advisory Council to the PM

i) Analysing any issue, economic or otherwise, referred to it by the Prime Minister and advising him thereon.

What is the purpose of the report?

• The experiences of deprivations are particularly more embedded in the Indian socio-economic fabric due to the multi-layered intersectional oppression that cuts across class, caste, gender and religion and continues to push certain groups towards complete exclusion.

• This exclusion is manifested in economic, political and socio-cultural forms.

• Consisting of two parts – Economic Facets and Socio-Economic Manifestations – the report looks at five key areas that influence the nature and experience of inequality.

• Based on the data derived from various rounds of the Periodic Labour Force Survey (PLFS), National Family and Health Survey (NFHS) and UDISE+, each chapter is dedicated to explaining the current state of affairs, areas of concern, successes and failures in terms of infrastructural capacity and finally, the effect on inequality.

• The report stretches the narrative on inequality by presenting a comprehensive analysis that shapes the ecosystem of various deprivation in the country, which directly impacts the well-being of the population and overall growth. It is a study that cuts across the intersections of class, gender, and region and highlights how inequality affects the society.

• With a first-time focus on income distribution to understand the capital flow, the report emphasises that wealth concentration as a measure of inequality does not reveal the changes in the purchasing capacity of households.

• The information available on inequality, which this report brings out, will help formulate reform strategies, a roadmap for social progress and shared prosperity.

• It will help determine the nature of change required for the reduction of inequality and poverty as well as sustained growth of the country.

• Moreover, information transparency with the public on matters of such intense importance as inequality leads to proactive involvement of all stakeholders resulting in innovative and sustainable solutions.

Key points in the report:

• The Labour Force Participation Rate (LFPR) is a measure to examine the working-age population in a country by looking at the section of people who are currently employed or seeking employment. According to the report, LFPR for 15 years and above for the educated workforce (secondary and above) stood at 48.8 per cent in 2017-18 and 2018-19. In 2019-20 this increased to 51.5 per cent.

• Education and household conditions have improved enormously due to targeted efforts through several social protection schemes, especially in the area of water availability and sanitation that have increased the standard of living. By 2019-20, 95 per cent of schools had functional toilet facilities on the school premises. Besides, 80.16 per cent of schools have functional electricity connections with states and Union Territories like Goa, Tamil Nadu, Chandigarh, Delhi, Dadra and Nagar Haveli & Daman and Diu, Lakshadweep and Puducherry achieving universal (100 per cent) coverage of functional electricity connections. The Gross Enrolment Ratio has also increased between 2018-19 and 2019-20 at the primary, upper primary, secondary and higher secondary.

Recommendations in the report:

1) The most important aspect of measuring poverty in a multidimensional context requires mapping the mobility in and out of poverty. Therefore, it is recommended to establish airtight slabs that make class-based distinctions clear to trace movement within a class and in and out of the class. Additionally, this will help define the middle-class income share and target beneficiaries of social protection schemes that constitute the lower-middle-class, lower-class, and those below the poverty line.

2) Raising minimum income and introducing universal basic income are some of the recommendations that can reduce the income gap and equal distribution of earnings in the labour market.

3) Looking at the difference between the labour force participation rate in rural and urban areas, it is our understanding that the urban equivalent of schemes like Mahatma Gandhi National Rural Employment Guarantee Scheme (MGNREGS), that are demand-based and offer guaranteed employment should be introduced so that the surplus-labour is rehabilitated.

4) Most importantly, the government must allocate more percentage of the expenditure towards social services and the social sector to make the most vulnerable population resilient to sudden shocks and stop their descent into poverty.

5) Equitable access to education and creation of more jobs with long term growth are vital for triggering an upward mobility among the poor.

6) The government should also encourage regular exercises like the Foundational Learning and Numeracy Index and Ease of Living Index for the purpose of stock taking of the extent of vulnerability among households and how to promote their overall well-being.