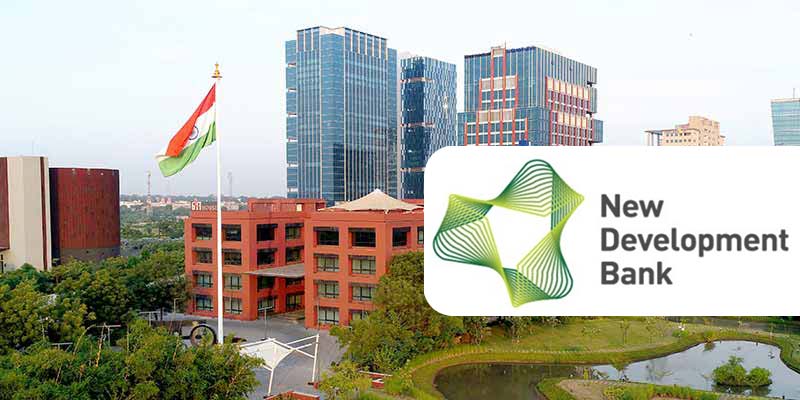 The New Development Bank (NDB) has announced plans to open its regional office of India at the Gujarat International Finance Tec-City (GIFT City).

Working in close coordination with the NDB headquarters, the Indian Regional Office will focus on project origination including initial project preparation and technical assistance, pipeline development, project implementation and monitoring as well as regional portfolio management.

• Its headquarters is situated in Shanghai.

• NDB started expanding its membership in 2021 with the admission of Bangladesh, United Arab Emirates (UAE), Uruguay and Egypt.

• The purpose of the bank is to mobilise resources for infrastructure and sustainable development projects in BRICS and other emerging market economies and developing countries to complement the existing efforts of multilateral and regional financial institutions for global growth and development.

• Since the beginning of its operations in 2015, NDB has approved about 80 projects for all of its members, totaling a portfolio of $30 billion. Projects in areas such as transport, water and sanitation, clean energy, digital infrastructure, social infrastructure and urban development are within the scope of the Bank.

• Projects in areas such as transport, water and sanitation, clean energy, digital infrastructure, social infrastructure and urban development are within the scope of the Bank.

• NDB’s membership expansion is in line with the Bank’s strategy to become the premier development institution for emerging economies and developing countries.

• In this context, the IRO is part of NDB’s effort to increase the quality and complexity of its operations, creating a network of business and development opportunities.

• The Bank is in the final stages of preparing for the physical opening of the office. NDB will soon announce the appointment of the director general, IRO.

Other regional offices of NDB

NDB officially opened its Africa Regional Center (ARC) in Johannesburg in 2017. Americas Regional Office (ARO) in Sao Paulo with a sub-office in Brasilia was established by the NDB in 2019. In 2020, NDB established the Eurasian Regional Centre (ERC) in Moscow. The NDB’s global network of offices complemented by the India Regional Office, allows for an enhanced engagement with clients and a better understanding of local market conditions, thus stepping up NDB’s capacity to gradually build a more sophisticated portfolio of projects.