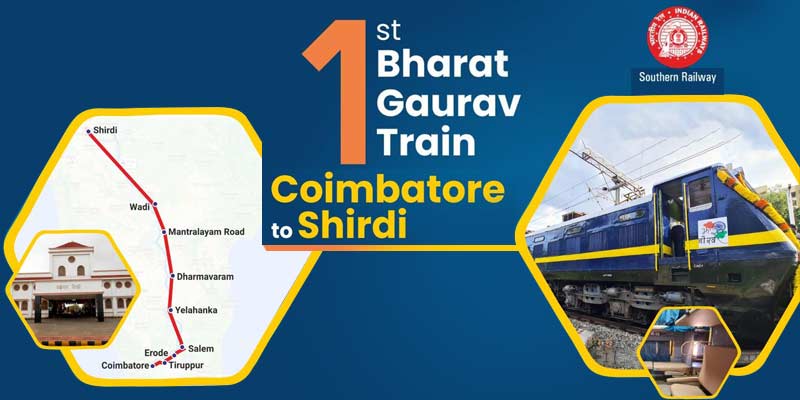 The first train to be operated between Coimbatore and Shirdi by a private operator, under the ‘Bharat Gaurav’ scheme of the Indian Railways, was flagged off on June 14.

• Indian Railways had launched the operation of theme-based Bharat Gaurav train in November 2021.

• The objective is to showcase India’s rich cultural heritage and magnificent historical places to the people of India and the world, through Bharat Gaurav Trains.

• This scheme also aims to leverage the core strengths of the professionals of the tourism sector to run theme-based trains to tap the vast tourist potential of India.

• Bharat Gaurav scheme will help in roping in more tour operators with professional experience and will give a boost to the tourism sector.

• As per the scheme, private players can lease trains for two years from the Indian Railways for a theme-based tourism circuit and the routes of the trains can be decided by the operators.

• South Star Rail is the registered service provider that operates Bharat Gaurav train from Coimbatore to Shirdi and back. This Coimbatore based company is part of the conglomerate group — Future Gaming & Hotel Services Pvt Ltd.

• The train will be maintained by housekeeping service providers, who will clean the utility areas during frequent intervals and the caterers are experienced in preparing traditional vegetarian menu.

• There will be a Train Captain, a doctor, private security personnel, along with the Railway Police Force on board.