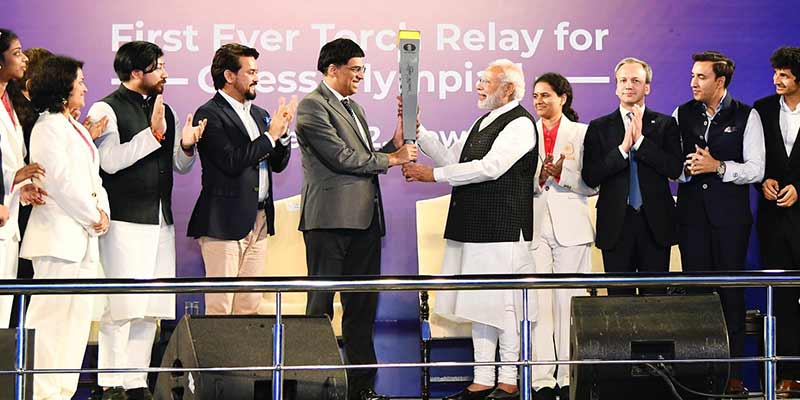 • Prime Minister Narendra Modi flagged off the first-ever torch relay for the Chess Olympiad ahead of the 44th edition of the event, which is to be held in Mahabalipuram from July 28 to August 10.

• The international chess body, FIDE, for the very first time has instituted the torch relay, which is part of the Olympic tradition but was never done in the Chess Olympiad.

• FIDE President Arkady Dvorkovich handed over the torch to the Prime Minister who then gave it to the legendary Viswanathan Anand.

• The torch will be taken to 75 cities in a span of 40 days before arriving in Mahabalipuram near Chennai. At every location, grandmasters of the state will receive the torch.

• With 188 countries registered for the upcoming Olympiad, the country is set to witness such a huge congregation of nations for a sporting event for the first time.

• FIDE organised the first Official Olympiad in 1927 which took place in London. The prestigious competition is being hosted in India for the first time and in Asia after 30 years. The Philippines hosted it in 1992.

• The International Chess Federation (Federation Internationale des Echecs) is the governing body of the sport of chess, and it regulates all international chess competitions. It was founded in 1924 in Paris. In 1999, FIDE was recognised by the International Olympic Committee as a global sporting organisation.

• The UN General Assembly has proclaimed July 20 as World Chess Day to mark the date of the establishment of the International Chess Federation (FIDE) in Paris in 1924.

Consider the following statements in respect of the 32nd Summer Olympics:

1. The official motto for this Olympics is ‘A New World’.

2. Sport Climbing, Surfing, Skateboarding, Karate and Baseball are included in this

Consider the following statements in respect of the ICC World Test Championship:

1. The finalists were decided by the number of matches they won.

2. New Zealand was ranked ahead of England because it won more matches than England.