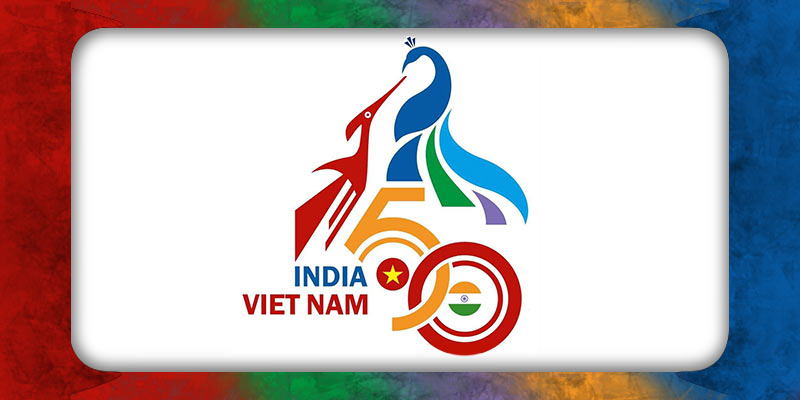 Minister of External Affairs Minister S. Jaishankar and the foreign minister of Vietnam Bui Thanh Son launched the joint logo for the celebration of 50 years of India-Vietnam diplomatic relations, on the sidelines of the Special ASEAN-India Foreign Ministers’ Meeting in New Delhi.

The logo has been selected jointly by the two sides through a contest open for nationals of both countries. The image represents long-standing friendship between India and Vietnam symbolically through a peacock and a crane, the birds of national importance in the two countries respectively.

• India and Vietnam share traditionally close and cordial bilateral relations. India was the chairman of the International Commission for Supervision and Control (ICSC) which was formed in pursuant of the Geneva Accord of 1954 to facilitate the peace process in Vietnam.

• India initially maintained consulate-level relations with the then North and South Vietnam and later established full diplomatic relations with unified Vietnam on January 7, 1972.

• Vietnam, an important country of the ASEAN (Association of Southeast Asian Nations), has territorial disputes with China in the South China Sea region.

• India has oil exploration projects in the Vietnamese waters in the South China Sea. India and Vietnam are boosting their maritime security cooperation in the last few years to protect common interests.

• Vietnam is an important partner in India’s Act East policy and the Indo-Pacific vision.

• Bilateral defence engagements have expanded over a period of time to include wide-ranging contacts between the two countries, including through defence policy dialogues, military-to-military exchanges, high-level visits, capacity building and training programmes and cooperation in the UN peacekeeping and bilateral exercises.

• Relations between the two countries were elevated to the level of ‘Strategic  Partnership’ during the visit of Vietnam's then Prime Minister Nguyen Tan Dung to India in July 2007.

• In 2016, during Prime Minister Modi's visit to Vietnam, bilateral relations were further elevated to a ‘Comprehensive Strategic Partnership’.

• In FY 2021-22, for India, Vietnam was the 23rd largest trading partner globally and the fourth largest among ASEAN countries, following Singapore, Indonesia and Malaysia.

1. Vietnam has been one of the fastest growing economies in the world in the recent years.

2. Vietnam is led by a multi-party political system.

3. Vietnam’s economic growth is linked to its integration with global supply chains and focus on exports.

5. Vietnam has the most productive e-service sector in the Indo-Pacific region.

Which of the statements given above are correct?