Now, ‘One Nation One Ration Card’ scheme covers all states/UTs 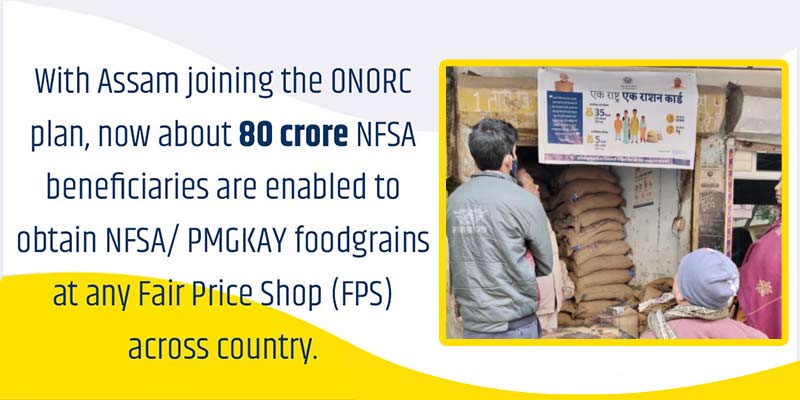 Assam has operationalised the ration card portability service and with this, the Centre’s ‘One Nation, One Ration Card’ (ONORC) programme is implemented across the country.

• With an objective to ensure food security of migratory beneficiaries, the government is implementing national portability of ration cards under National Food Security Act (NFSA), 2013 as part of an ambitious ‘One Nation One Ration Card’ (ONORC) plan to ensure seamless access to Public Distribution System (PDS) and delivery of food-security entitlements to all beneficiaries covered under the Act anywhere in the country in association with all state/UT governments.

• Initially, this was started as inter-state portability in August 2019 in four states of Andhra Pradesh & Telangana and Gujarat & Maharashtra.

• In January 2020, the facility of national portability of ration cards was seamlessly started in 12 states.

• The migratory beneficiaries/households are now able to lift their entitled food grains from any ePoS (electronic Point of Sale device) enabled Fair Price Shop (FPS) of their choice anywhere in these states/UTs using their existing ration cards with biometric authentication.

• It is envisaged that nearly 8 crore migratory population may exist in the country.

• To ensure seamless inter-state portability of a ration card, Aadhaar seeding of all ration cards as well as biometric authentication of beneficiaries through automation of all FPS with installation of e-PoS devices are essential.

• One Nation One Ration Card (impds.nic.in) portal is set up to monitor the national portability operations, transactions, distribution under ONORC plan in the integrated states/UTs.

• The main objective of the Integrated Management of Public Distribution System (IM-PDS) scheme is to implement nationwide portability of benefits under NFSA by integrating the existing PDS systems/portals of states/UTs with the central systems/portals under central repository of all NFSA ration cards/beneficiaries. The creation of a central repository of all ration cards/beneficiary data of all states/UTs shall ensure that no duplicate ration card/beneficiary exists under NFSA.

• Also, ‘Mera Ration’ mobile app has been developed. Besides migrant beneficiaries, this app can be used by all NFSA beneficiaries to get various information in respect of their ration cards, entitlements, nearby shops, registration for portability, etc on their mobiles. The app is available in 13 languages. So far, the app has more than 20 lakh downloads from Google PlayStore.

• Since 2019, about 71 crore portable transactions have taken place delivering food grains equivalent to about Rs 40,000 crore in food subsidy through portability.

• At present, a monthly average of about 3 crore portable transactions are being recorded, delivering the subsidised NFSA and free PMGKAY food grains with anywhere flexibility to the beneficiaries.

• During the COVID-19 period from April 2020 till date, about 64 crore portable transactions have been recorded, delivering food grains equivalent to about Rs 36,000 crore in food subsidy through portability.

• Out of these 64 crore portable transactions, 27.8 crore were recorded under the Pradhan Mantri Garib Kalyan Anna Yojana (PMGKAY), announced in March 2020 for distribution of additional free food grains to NFSA beneficiaries to mitigate the COVID-induced hardships.