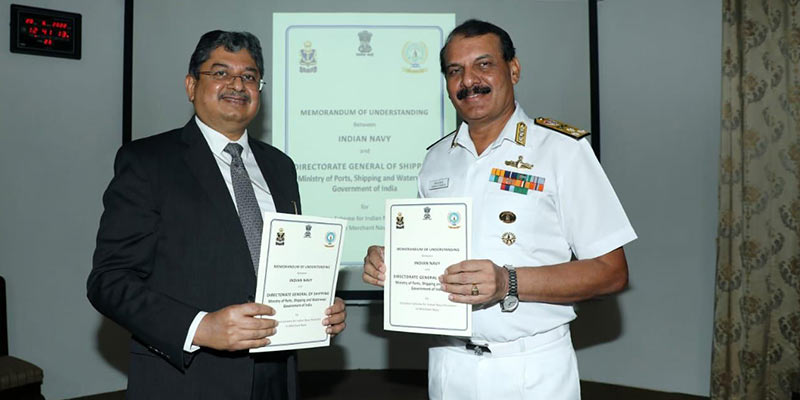 • To benefit personnel retiring from the Navy and provide them opportunity to work on merchant ships, an MoU has been signed between the Directorate General of Shipping and Indian Navy.

• The Directorate General of Shipping, under the ministry of ports, shipping and waterways, has issued an order detailing 16 transition schemes for Indian Navy personnel to merchant navy.

• These schemes enable smooth transition of the retiring Indian Navy personnel into merchant navy by acquiring necessary certification to work on merchant ships in accordance with the Standards of Training Certification and Watchkeeping Convention of International Maritime Organisation.

• The transition schemes cater for transition of personnel involved in engine room work on naval ships that is from rating to artificers to engineers and also provides options for those working on electrical duties as well as mechanical engine duties.

• The scheme envisages acceptance of training given by the Indian Navy to its officers and ratings and the sea service experience on Indian naval or cargo ships on the basis of a certificate issued by the Indian Navy.

• The Directorate General of Shipping was established in 1949 as the Maritime Administration of India.

• This Directorate deals with all matters concerning the maritime administration, maritime education and training, development of shipping industry and other related subjects.

• It deals with implementation of shipping policy and legislation, so as to ensure the safety of life and ships at sea, prevention of marine pollution and other mandatory regulations of the International Maritime Organisations are effectively implemented including promotion of maritime education and training, examination and certification of seafarers and supervision of other subordinate offices for their effective functioning, etc.

• The Director General of Shipping is appointed under section 7 of the Merchant Shipping Act, 1958.

• The field formation of Directorate General of Shipping is headed by Principal Officers who are assisted by surveyors of Engineering, Nautical and Naval Architecture sides.

• The heads of allied offices supported by their subordinate officers also assist the Director General of Shipping in the overall discharge of various statutory functions.