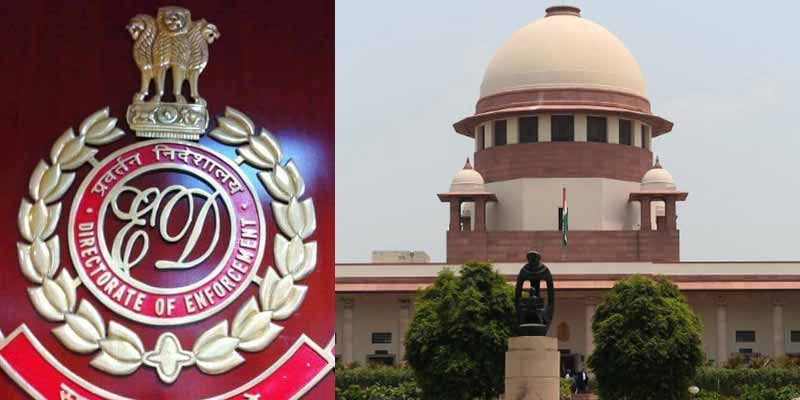 • The Supreme Court has upheld the Enforcement Directorate’s (ED) powers relating to arrest, attachment of property involved in money laundering, search and seizure under the Prevention of Money Laundering Act (PMLA) that were challenged by multiple petitioners.

• Upholding the validity of some provisions of the PMLA, a bench headed by Justice A.M. Khanwilkar also said Section 5 of the Act relating to the attachment of property of those involved in money laundering is constitutionally valid.

• The SC bench noted that Section 19 that deals with the power to arrest does not suffer from the “vice of arbitrariness”. The bench said it is enough if the ED discloses grounds at the time of arrest.

• The apex court said the supply of Enforcement Case Information Report (ECIR) in every case to the person concerned is not mandatory. The ECIR is the ED’s equivalent of a police FIR.

• The Supreme Court said section 45 of the PMLA, which deals with offences to be cognisable and non-bailable and have twin conditions for bail, is reasonable and does not suffer from vice of arbitrariness or unreasonableness.

• The bench also endorsed section 24 of PMLA relating to self-incrimination. Section 24 says when a person is accused of having committed the offence of money laundering, the burden of proving that proceeds of crime are untainted property shall be on the accused. It said Section 24 of the law has reasonable nexus with the purposes and objects sought to be achieved by the Act and it cannot be regarded as unconstitutional.

• The Centre had earlier told the apex court that 4,850 cases have been taken up for investigation under the PMLA in the last 17 years and proceeds of crime of Rs 98,368 crore identified and attached under provisions of the law.

• The government had told the court that investigation in these offences was carried out under the PMLA, including 2,883 searches. Out of the Rs 98,368 crore identified and attached, proceeds of crime of Rs 55,899 crore have been confirmed by the adjudicating authority.

What is money laundering?

• Money laundering generally refers to financial transactions in which criminals, including terrorist organisations, attempt to disguise the proceeds, sources or nature of their illicit activities. Money laundering facilitates a broad range of serious underlying criminal offences and ultimately threatens the integrity of the financial system.

• Through money laundering, the criminal transforms the monetary proceeds derived from criminal activity into funds with an apparently legal source.

• This process has devastating social consequences. For one thing, money laundering provides the fuel for drug dealers, terrorists, arms dealers, and other criminals to operate and expand their criminal enterprises.

Two main objectives of the Act are:

• Section 3 of the PMLA criminalises the offence of money laundering related to a wide range of criminal offences listed in the schedule to the PMLA.

• These offences listed in the schedule are called “predicate offences” and section 3 of the PMLA states that whoever is directly or indirectly involved or associated with any process or activity connected with “proceeds of crime” related to these criminal activity will be guilty of the offence of money laundering and is liable for punishment with rigorous imprisonment of three to 10 years under section 4 of the PMLA.

• The scope of section 3 has been widened over the years following a risk based approach to ensure that each and every kind of money laundering offence is covered under the provision and the “proceeds of crime” are not enjoyed with any person who could in any way connected to the underlying criminal activity.

• The primary function of the Enforcement Directorate is administration and enforcement of the Prevention of Money Laundering Act, 2002 (PMLA) including investigation into the offence of money laundering, filing of prosecution complaint before the special court against the accused, attachment and confiscation of property involved in money laundering and carrying out international cooperation with competent authorities in foreign jurisdictions.

• In certain cases, the fact that a predicate offence has taken place is also obtained from publicly available sources or on receipt of information from the Financial Intelligence Unit (FIU).

• On receipt of the reference or information and after making certain preliminary verification, the ED registers a case and initiates investigation (Enforcement Case Information Report or the ECIR) following a risk based approach taking into consideration factors such as materiality of the offence, transnational nature of the crime, complexity of the case, the larger public interest and the availability of resources.