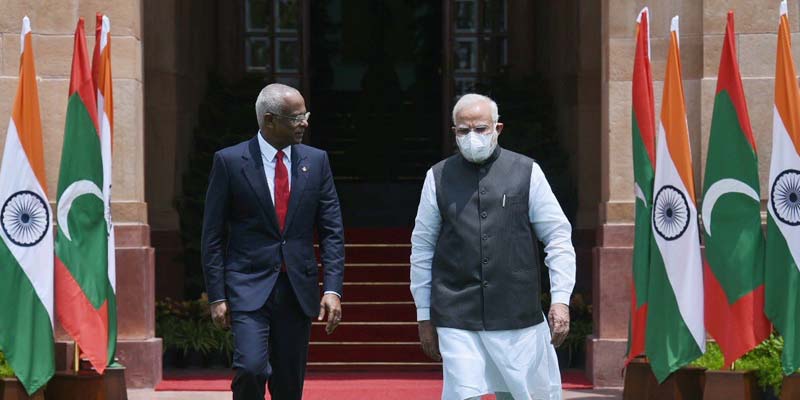 • This is President Solih’s third visit to India since assuming office on November 17, 2018.

• Modi and Solih participated in the virtual “pouring of the first concrete ceremony” of the $500 million project after holding wide-ranging talks that focused on bolstering overall bilateral ties.

• In August last year, the island nation sealed a contract for the implementation of the India-funded connectivity project.

• Under the Greater Male Connectivity Project (GMCP) project, a 6.74 km long bridge and causeway link will be built to connect the capital city Male with adjoining islands of Villingili, Gulhifalhu and Thilafushi.

• The project in Maldives will cut down logistics cost and drive people-centric economic growth, which will be a symbol of enduring friendship between the two countries.

• The GMCP is the largest infrastructure project ever undertaken in the Maldives and it is one of India’s largest projects in the neighbourhood.

• The project will be a major catalyst for the Maldivian economy as it will create jobs and economic activities.

ii) Cooperation in the area of cyber security.

vi) Letter of Intent for Buyer’s Credit financing of 2,000 social housing units  to be constructed in Hulhumale.

• India and Maldives share ethnic, linguistic, cultural, religious and commercial links. Both the nations enjoy close, cordial and multidimensional relations based on shared values of democratic virtues, peaceful coexistence and rule of law.

• Both the countries are key players in maintaining safety and security of the Indian Ocean Region (IOR).

• Maldives occupies a very special place in the ‘Neighborhood First Policy’ and the SAGAR (Security and Growth for All in the Region) vision of the government of India.

• ‘India First’ has been a stated policy of the government of Maldives and President Solih, ever since he assumed office in November 2018.

Defence: Since 1988, defence and security has been a major area of cooperation between India and Maldives. India has been assisting Maldives in capacity building by meeting its requirements of defence training and equipment. India provides the largest number of training opportunities for Maldivian National Defence Force (MNDF), meeting around 70 per cent of their defence training requirements. A comprehensive Action Plan for Defence was also signed in April 2016 to consolidate defence partnership.

To further ease export and import, in July 2021, India’s Central Board of Indirect Taxes and Customs (CBIC) and Maldives Customs Service (MCS) signed a MoU on Pre-arrival exchange of cargo data.

Tourism: The Maldivian economy is heavily dependent on its tourism sector, which is the major source of foreign exchange earnings and government revenue. Tourism directly accounts for about quarter of the Gross Domestic Product (GDP) of Maldives and indirectly for a much larger proportion of GDP. In terms of direct employment, tourism accounts for more than a third of job opportunities for Maldivians and if the allied sectors are included, the contribution of tourism sector in total employment (direct and indirect) would rise up to nearly 70 per cent. India was among the top sources of tourists for Maldives in 2020 and 2021, helped by the air bubble arrangement, with more than 60 flights per week.