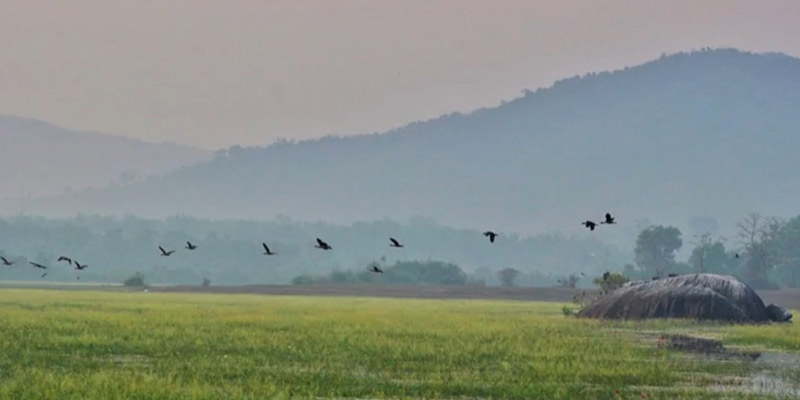 Ten more Indian sites have entered the Ramsar List, taking the number of wetlands of international importance in the country to 64.

The new sites include six wetlands from Tamil Nadu and one each from Goa, Karnataka, Madhya Pradesh and Odisha.

So far, 64 wetlands covering an area of 12,50,361 hectares have been designated as Ramsar Sites of International Importance from India.

1) Koonthankulam Bird Sanctuary is a significant man-made wetland which covers an area of 72.04 hectares. It is situated in Nanguneri Taluk of Tirunelveli district of Tamil Nadu and is the largest reserve for breeding resident and migratory water birds in South India.

2) Satkosia spreads along the magnificent gorge over the river Mahanadi in Odisha. Established in 1976 as a wildlife sanctuary, Satkosia is the meeting point of two biogeographic regions of India: the Deccan Peninsula and the Eastern Ghats. Satkosia Gorge wetland is a mosaic of marshes and evergreen forests. The forests of these catchments play a vital role in the prevention of the gorge siltation. It also helps in maintaining a specific desirable depth of water crucial for the endangered gharial population and spawning of commercially important carps species.

3) Nanda Lake in Goa is considered to be critically significant for its ecosystem services and biodiversity values for the local communities and society at large. A majority of the area is intermittent freshwater marshes that lie adjacent to one of the major rivulets of the Zuari River.

5) Ranganathittu Bird Sanctuary is located in the Mandya district of Karnataka. It has been enlisted as one of the Important Bird Areas in Karnataka and India by the Bombay Natural History Society.

6) Vembannur wetland in Tamil Nadu is a man-made inland tank which forms the southernmost tip of peninsular India. This wetland forms part of the Important Bird and Biodiversity Area and hence part of the BirdLife International Data Zone. About 250 species of birds have been recorded in the district.

7) Vellode Bird Sanctuary is located in the Vadamugam Vellode village in Tamil Nadu’s Erode district. Locally known as Periyakulam Yeri, it is one of the 141 prioritized wetlands in the state.

8) Sirpur wetland is a significant historical wetland in Indore which is only important for its aesthetic value but also provides immense ecological services such as being an important source of water and helping groundwater recharge in the downstream areas. Sirpur wetland is also culturally important to the local communities of the city.

9) Vedanthangal wetland is one of the oldest bird-protected areas in Chengalpattu district of Tamil Nadu. This freshwater wetland is a people-protected waterbird area, the history of which goes back to centuries where locals have been protecting this heronry and in return benefited from the manure-rich water from the lake. This site is also recognized internationally, as an Important Bird and Biodiversity Area (IBA).

10) Udhayamarthandapuram Bird Sanctuary is located in the TiruthuraipoondiTaluk of Tiruvarur district of Tamil Nadu. It is an important staging and breeding ground for several species of waterbirds.

What is the Ramsar Convention?

• The Ramsar Convention is an international treaty signed by 172 countries to protect wetlands. It is named after the city in Iran where it was signed, and it began with 18 countries in 1971.

• The convention is one of the oldest inter-governmental accords for preserving the ecological character of wetlands. Also known as the Convention on Wetlands, it aims to develop a global network of wetlands for the conservation of biological diversity and for sustaining human life.

• It is one of the largest international agreements, after the Convention on Biological Diversity (CBD, 196 countries) and the UN climate agreement (UNFCCC, 197 countries).

• The Ramsar List is the world’s largest network of protected areas.

• There are over 2,400 Ramsar Sites around the world. The first Site was the Cobourg Peninsula in Australia, designated in 1974. The largest Sites are Rio Negro in Brazil (120,000 sq km), and Ngiri-Tumba-Maindombe in the Democratic Republic of Congo and Queen Maud Gulf in Canada. These Sites each cover over 60,000 sq km.

• The countries with the most Sites are the United Kingdom with 175 and Mexico with 142. Bolivia has the largest area with 148,000 square km under the Convention protection.

• The signatory countries promise to make inventories of their Ramsar Sites and to develop management plans. These management plans include the sustainable use of the many other functions of wetlands, such as food production, water storage and recreation.

• They are, in fact, a major source of water and our main supply of freshwater comes from an array of wetlands which help soak rainfall and recharge groundwater.

• Every year, February 2 is observed as World Wetlands Day to raise global awareness about the vital role of wetlands for our planet. This day also marks the date of the adoption of the Convention on Wetlands on February 2, 1971, in Ramsar, Iran.

A wetland should be considered internationally important:

1) If it contains a representative, rare, or unique example of a natural or near-natural wetland type found within the appropriate biogeographic region.

2) If it supports vulnerable, endangered, or critically endangered species or threatened ecological communities.

3) If it supports populations of plant and/or animal species important for maintaining the biological diversity of a particular biogeographic region.

4) If it supports plant and/or animal species at a critical stage in their life cycles, or provides refuge during adverse conditions.

6) If it regularly supports 1 per cent of the individuals in a population of one species or subspecies of waterbird.

7) If it supports a significant proportion of indigenous fish subspecies, species or families, life-history stages, species interactions and/or populations that are representative of wetland benefits and/or values and thereby contributes to global biological diversity.

8) If it is an important source of food for fishes, spawning ground, nursery and/or migration path on which fish stocks, either within the wetland or elsewhere, depend.

9) If it regularly supports 1 per cent of the individuals in a population of one species or subspecies of wetland-dependent non-avian animal species.