Indian Oil to give Rs 50 crore for cheetah reintroduction project 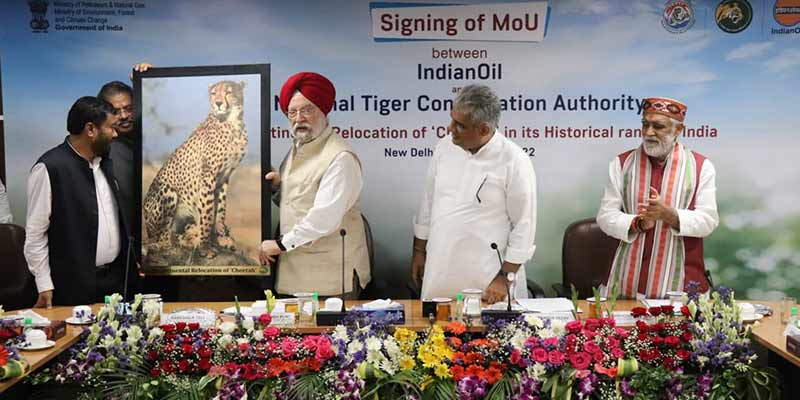 • Indian Oil will contribute Rs 50 crore over four years to the government’s cheetah reintroduction project, according to a pact signed with the National Tiger Conservation Authority (NTCA).

• Indian Oil is the first corporate group to have come forward to support the ‘Project Cheetah’ under corporate social responsibility (CSR).

• Under this cheetah reintroduction project, a source population of 8-10 cheetahs will be flown in from Namibia and South Africa and will be introduced at Kuno National Park, Madhya Pradesh.

• Last month, India and Namibia had signed a pact for the reintroduction of cheetahs, declared extinct in the country in 1952.

• ‘Project Cheetah’ is one-of-a-kind project in which a species is being restored in the country by bringing it from out of the country.

• The cheetah reintroduction project in Kuno National Park involves creating a 500-hectare predator proof enclosure for a ‘soft release’ of the feline.

• The first batch of cheetah would be soft released in the enclosure with GPS/GSM or GPS/satellite transmitters.

Why is India reintroducing African Cheetah instead of Asiatic Cheetah?

The locally extinct cheetah sub-species of India is found in Iran and is categorised as critically endangered. Since it is not possible to source the critically endangered Asiatic cheetah from Iran without affecting this sub-species, India will source cheetahs from Southern Africa, which can provide India with substantial numbers of suitable cheetah for several years.

Where will cheetahs be relocated in India?

• Kuno National Park (NP) in Madhya Pradesh will get cheetahs, which can co-exist with leopards.

• Move is being described as the world’s largest intercontinental animal translocation.

• KNP is 748 sq. km in area, devoid of human settlements, forms part of Sheopur-Shivpuri deciduous open forest landscape and is estimated to have a capacity to sustain 21 cheetahs.

• It has a suitable habitat and adequate prey base.

• Kuno also offers the prospect of housing four big cats of India — tiger, lion, leopard and cheetah — and allowing them to coexist as in the past.

Some facts on cheetah:

• They are the fastest mammals on land.

• Cheetah is the only large carnivore that got completely wiped out from India in 1952, mainly due to over-hunting and habitat loss.