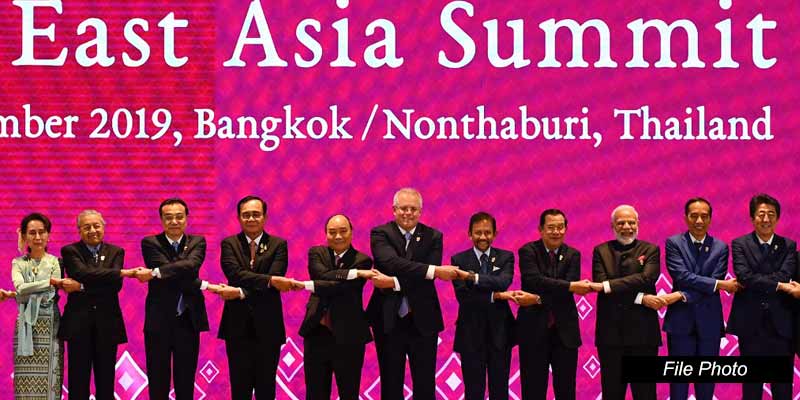 What is East Asia Summit?

• The East Asia Summit (EAS) is the Indo-Pacific’s premier forum for strategic dialogue. It is the only leader-led forum at which all key partners meet to discuss political, security and economic challenges facing the Indo-Pacific, and has an important role to play in advancing closer regional cooperation.

• Established in 2005, EAS allows the principal players in the Indo-Pacific region to discuss issues of common interest and concern, in an open and transparent manner, at the highest level.

• Since its inception, it has played a significant role in the strategic, geopolitical and economic evolution of East Asia.

• It is also an important platform for furthering practical cooperation in the Indo-Pacific by building upon the convergence between ASEAN Outlook on Indo-Pacific (AOIP) and Indo-Pacific Ocean’s Initiative (IPOI).

There are six priority areas of regional cooperation within the framework of the EAS. These are:

i) Environment and Energy

• Following the adoption of the Manila Plan of Action in 2017, maritime cooperation has been identified as an important area of cooperation under the EAS.

• According to estimates, EAS members represent 54 per cent of the world’s population and account for 62 per cent of global GDP.

• The concept of an East Asia Grouping was first promoted in 1991 by the then Malaysian Prime Minister, Mahathir bin Mohamad.

• The final report of the East Asian Study Group in 2002, established by the ASEAN+3 countries (China, Japan and South Korea), recommended EAS as an ASEAN-led development limited to the ASEAN +3 countries.

• However, the ASEAN Ministerial Meeting (AMM) held in Vientiane in July  2005 welcomed the participation of ASEAN, China, Japan, South Korea, Australia, India and New Zealand, in the first EAS.

• The US and the Russian Federation were formally included as members of the EAS at the 6th East Asia Summit held in Bali, Indonesia in November 2011.