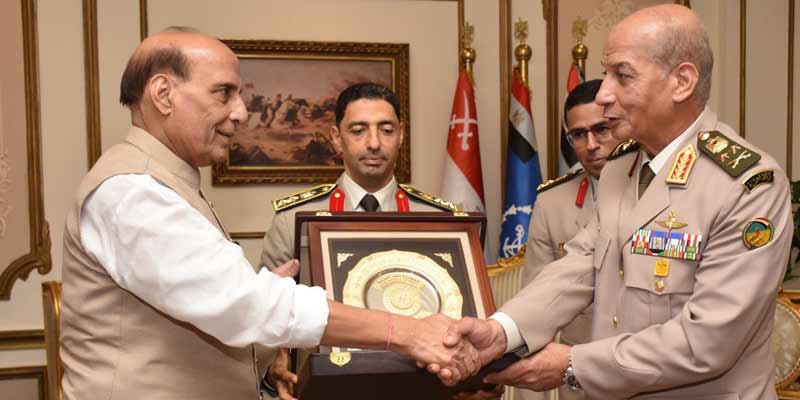 • Rajnath Singh reached Cairo on September 18 on a three-day visit to the strategically important Arab country.

• During the meeting, both sides discussed steps to strengthen defence ties and reached a consensus to enhance the conduct of joint exercises and exchange of personnel for training, especially in the field of counter-insurgency.

• The two ministers also agreed to identify proposals for expanding cooperation between the defence industries of India and Egypt in a time-bound manner.

• They also exchanged views on regional security and acknowledged the contribution of India and Egypt to peace and stability in the world.

• The signing of the MoU by the two defence ministers on cooperation in the field of defence was a milestone event during the visit, which will pave the way for enhancing defence cooperation across all sectors of mutual interest.

• India and Egypt, two of the world’s oldest civilisations, have enjoyed a history of close contact from ancient times. Ashoka’s edicts refer to his relations with Egypt under Ptolemy-II.

• Mahatma Gandhi and Saad Zaghloul shared common goals on the independence of their countries, a relationship that was to blossom into an exceptionally close friendship between President Gamal Abdel Nasser and Prime Minister Jawaharlal Nehru, leading to a Friendship Treaty between the two countries in 1955.

• The joint announcement of establishment of diplomatic relations at Ambassadorial level was made on August 18, 1947.

• Both countries have cooperated closely in multilateral fora and were the founding members of Non-Aligned Movement.

• The year 2022 is of particular significance since it marks the 75th anniversary of diplomatic relations between India and Egypt.

• Egypt has traditionally been one of India’s most important trading partners in the African continent. The India-Egypt Bilateral Trade Agreement has been in operation since March 1978 and is based on the Most Favoured Nation (MFN) clause and the bilateral trade has increased more than five times in the last 10 years.

• During 2021-22, the top Indian imports from Egypt were mineral oil/petroleum, fertilisers, inorganic chemicals and cotton. Main items of export to Egypt from India were buffalo meat, iron & steel, light vehicles and cotton yarn.

• According to the Egyptian Central Agency for Public Mobilization and Statistics (CAPMAS), India was the third largest export market for Egypt, sixth largest trading partner and seventh largest exporter to Egypt.

• Bilateral mechanisms are in place to facilitate trade and economic relations between India and Egypt.

• Around 50 Indian companies have invested in various sectors in Egypt with a combined investment exceeding $3.15 billion. Egyptian investments in India are to the tune of $37 million.

• Egypt signed the International Solar Alliance framework agreement as a founding member in March 2018 and ratified it in January 2019.

• Egypt and India enjoy cordial defence relations. Most of the current defence cooperation is determined by Joint Defence Committee (JDC) activities. Starting in 2006, nine JDC meetings have been held alternately in either country, followed by exchange activities.