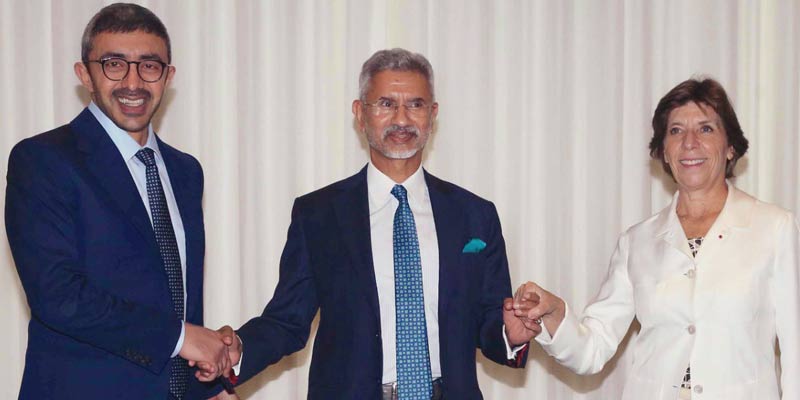 • India, the UAE and France have held their first trilateral ministerial meeting in New York on the sidelines of a UN General Assembly session and discussed a new and more contemporary way of doing diplomacy with a focus on active exchange of ideas between strategic partners and UNSC members.

• This was the first ministerial-level meeting of the India, the UAE and France trilateral.

• The three countries, while different, are strategic partners to one another and discussions focussed on areas of commonalities and on working out how to specify and concretise these commonalities going forward.

• The three countries are very comfortable with each other and there are many areas where potentially they could be working in a more coordinated way.

• Such plurilateral meetings signify a new and more contemporary way of doing diplomacy, experts said, citing the example of Quad (Australia, India, Japan, the US), I2U2 (India, Israel, the United Arab Emirates and the United States), trilateral between India, France and Australia as forums emerging as effective ways of finding a common agenda.

• Typically, groupings were regional and contiguous in nature such as SAARC, BIMSTEC, ASEAN, and the EU with the exception of BRICS (Brazil, Russia, India, China and South Africa).

• Diplomacy is now changing and there are countries which are not neighbours or next to each other in a region but which have certain common interests and are working with each other.