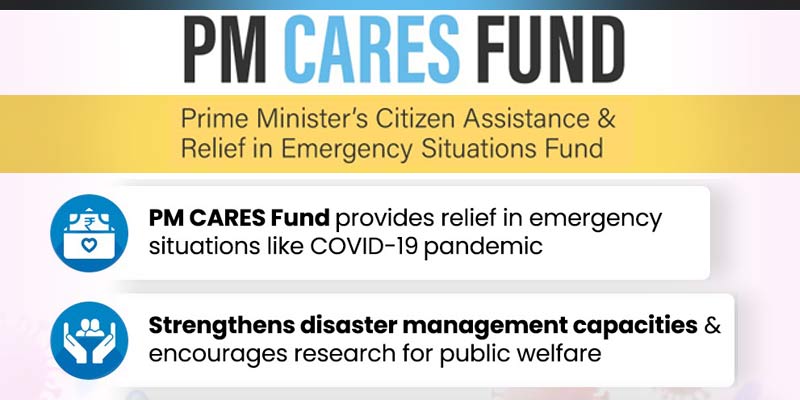 • A presentation was made on the various initiatives undertaken with the help of PM CARES Fund, including the PM CARES for Children scheme which is supporting 4,345 children.

The trust also decided to nominate some eminent persons for constitution of Advisory Board to PM CARES Fund. They are:

• Anand Shah, co-founder of Teach for India and former CEO of Indicorps and Piramal Foundation.

What is PM CARES Fund?

• A public charitable trust under the name of Prime Minister’s Citizen Assistance and Relief in Emergency Situations Fund (PM CARES Fund) has been set up keeping in mind the need for having a dedicated national fund with the primary objective of dealing with any kind of emergency or distress situation, like posed by the COVID-19 pandemic, and to provide relief to the affected.

• PM CARES Fund has been registered as a Public Charitable Trust in March 2020.

• The fund consists entirely of voluntary contributions from individuals/organisations and does not get any budgetary support.

• The head office of the Fund is Prime Minister’s Office.

• To undertake and support relief or assistance of any kind relating to a public health emergency or any other kind of emergency, calamity or distress, either man-made or natural, including the creation or upgradation of health care or pharmaceutical facilities, other necessary infrastructure, funding relevant research or any other type of support.

• To render financial assistance, provide grants of payments of money or take such other steps as may be deemed necessary by the Board of trustees to the affected population.