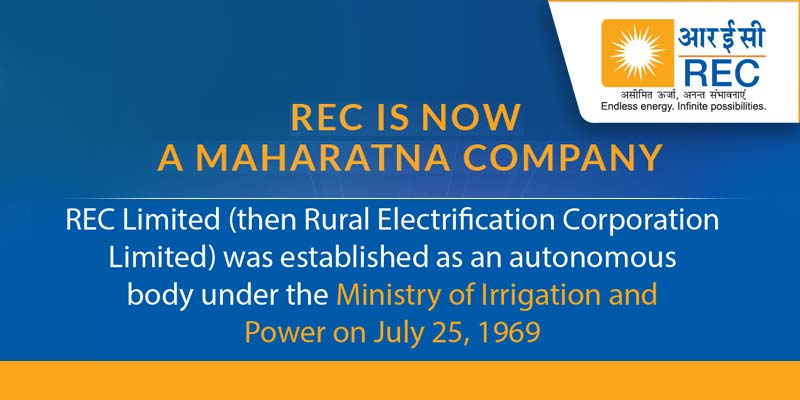 State-run REC Ltd was accorded the status of a ‘Maharatna’ Central Public Sector Enterprise. This will give REC greater operational and financial autonomy. An order to this effect was issued on September 21 by the Department of Public Enterprises, under the ministry of finance.

• REC Limited (REC) is a premier financial institution for development of power sector in the country, with the objective of financing schemes for extending and improving the rural electricity infrastructure.

• It was established in 1969 as Rural Electrification Corporation Limited with the main objective of financing rural electrification schemes in the country. The mandate/object clause of REC was expanded in the year 2002 to enable financing all kinds of power projects without any restriction on population, geographical location or size.

• In 2021 the same was further amended for focusing on projects of lift irrigation, smart city and for development of enabling infrastructure including energy conservation, emerging technologies like e-mobilities and associated infrastructure, etc.

• REC was granted Miniratna Grade-I Status in 2002 and thereafter conferred with Navratna status in May 2008.

• REC has also been categorised as an Infrastructure Finance Company (IFC) by Reserve Bank of India (RBI) in September 2010.

• The corporate office is situated in Gurugram and there are regional offices in 22 states. In addition, REC has a training institute — REC Institute of  Power Management & Training (RECIPMT) — in Hyderabad for imparting training to state power utilities.

• Further, alongwith Power Finance Corporation, REC has also been designated as nodal agency for Revamped Distribution Sector Scheme (RDSS). Besides, REC assists the ministry of power in monitoring Power For All.

Maharatna status grants more powers to the board

• The grant of Maharatna status to REC will impart enhanced powers to the company's board while taking financial decisions.

• The board of a Maharatna CPSE can make equity investments for financial joint ventures and wholly-owned subsidiaries and undertake mergers and acquisitions in India and abroad, subject to a ceiling of 15 per cent of the net worth of the concerned CPSE, limited to Rs 5,000 crore in one project.

• The board can also structure and implement schemes relating to personnel and human resource management and training. With this, REC can also enter into technology joint ventures or other strategic alliances.

What is Maharatna, Navratna and Miniratna status?

Under Articles of Association, the board of directors of Central Public Sector Enterprises (CPSEs) enjoys autonomy in respect of recruitment, promotion and other service conditions of below board level employees.

The board of directors of a CPSE exercises delegated powers subject to broad policy guidelines issued by the government from time to time.

The government has granted enhanced powers to the Boards of the profit-making enterprises under various schemes like Maharatna, Navratna and Miniratna.

• The main objective of the Maharatna scheme which was introduced in 2010 is to empower mega CPSEs to expand their operations and emerge as global giants.

• Maharatna CPSEs compared to others are given greater autonomy for flexibility in respect of capital expenditure, formation of strategic alliance, formulation of HR policies etc.

• The Board of a Maharatna CPSE can make equity investments to undertake financial joint ventures and wholly-owned subsidiaries and undertake mergers and acquisitions in India and abroad, subject to a ceiling of 15 per cent of the networth of the concerned CPSE, limited to Rs 5,000 crore in one project.

• The board can also structure and implement schemes relating to personnel and human resource management and training. They can also enter into technology joint ventures or other strategic alliances.

The CPSEs meeting the following eligibility criteria are considered for Maharatna status:

a) Having Navratna status.

c) An average annual turnover of more than Rs 25,000 crore during the last three years.

d) An average annual net worth of more than Rs 15,000 crore during the last three years.

e) An average annual net profit after tax of more than Rs 5,000 crore during the last three years.

The Maharatna CPSEs are:

The government introduced the Navratna scheme in 1997.

Under this scheme, the Boards of Navratna CPSEs have been delegated enhanced powers in the areas of:

The CPSEs which are Miniratna I, Schedule ‘A’ and have obtained ‘excellent’ or ‘very good’ MOU rating in three of the last five years and have a ‘Composite Score’ of performance to be 60 or above in six identified performance parameters are eligible to be considered for grant of Navratna status.

1) Net Profit to Net worth

3) Profit Before Depreciation, Interest and Tax (PBDIT) to Capital Employed

4) Profit Before Interest and Tax (PBIT) to Turnover

• In October 1997, the government decided to grant enhanced autonomy and delegation of financial powers to some other profit making companies subject to certain eligibility conditions and guidelines to make them efficient and competitive.

• These companies, called Miniratnas, are in two categories, namely, Category- I and Category-II.

• Category-I CPSEs should have made profit in the last three years continuously, the pre-tax profit should have been Rs 30 crore or more in at least one of the three years and should have a positive net worth.

• Category-II CPSEs should have made profit for the last three years continuously and should have a positive net worth.