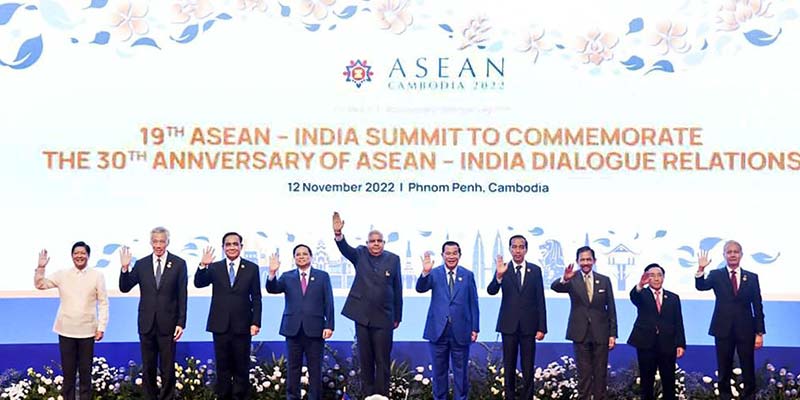 • Dhankhar led the Indian delegation to the 19th ASEAN-India Summit to Commemorate the 30th Anniversary of ASEAN-India Dialogue Relations on November 12 in Phnom Penh.

• The year 2022 is being celebrated as ‘ASEAN-India Friendship Year’.

• The Summit was historic as it elevated the ASEAN-India relations to a ‘Comprehensive Strategic Partnership’, that is meaningful, substantive and mutually beneficial.

• He announced the additional contribution of $5 million to ASEAN-India science and technology fund to enhance cooperation in sectors of public health, renewable energy and smart agriculture.

• The Vice President also attended the 17th East Asia Summit on November 13 during which he highlighted the importance of the EAS as the premier leaders led forum in the region and emphasised on its further strengthening to make it more adaptive, resilient and dynamic. 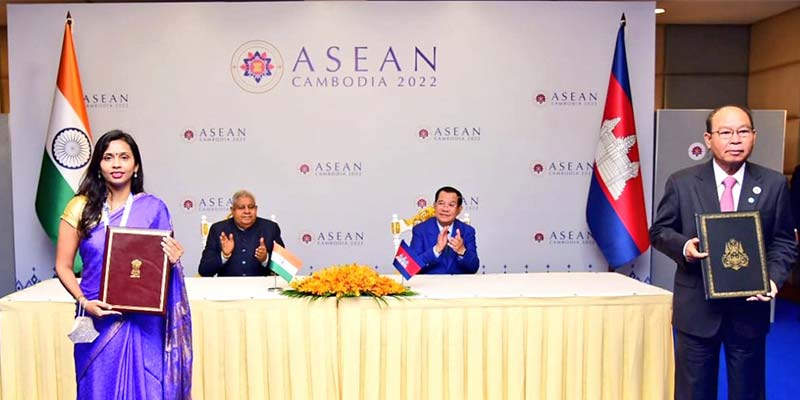 • The Association of Southeast Asian Nations (ASEAN) was established on August 8, 1967 in Bangkok by five countries —  Indonesia, Malaysia, Philippines, Singapore, and Thailand.

• The ASEAN Summit is the highest policy-making body in ASEAN comprising the heads of State or government of ASEAN member states. As per regular practice, the ASEAN Summit Meetings shall be held twice annually. The first ASEAN Summit was held in Bali, Indonesia on February 23-24, 1976.

• The ASEAN is considered one of the most influential groupings in the region. India and several other countries, including the US, China, Japan and Australia, are its dialogue partners.

The aims and purposes of ASEAN are:

• Accelerate the economic growth, social progress and cultural development in the region through joint endeavors in the spirit of equality and partnership in order to strengthen the foundation for a prosperous and peaceful community of Southeast Asian Nations.

• Promote regional peace and stability through abiding respect for justice and the rule of law in the relationship among countries of the region and adherence to the principles of the United Nations Charter.

• Provide assistance to each other in the form of training and research facilities in the educational, professional, technical and administrative spheres.

• Collaborate more effectively for the greater utilisation of their agriculture and industries, the expansion of their trade, including the study of the problems of international commodity trade, the improvement of their transportation and communications facilities and the raising of the living standards of their peoples.

• Maintain close and beneficial cooperation with existing international and regional organisations with similar aims and purposes, and explore all avenues for even closer cooperation among themselves.

• ASEAN centrality has been, and will remain, an important aspect of India’s ‘Act East’ policy which is a central element in the country’s foreign policy.

• The collaboration has transcended the realm of functional cooperation to cover political and security dimensions. India participates in a series of consultative meetings with ASEAN under the ASEAN-India Dialogue Relations, which include Summit, ministerial meetings, senior officials meetings, and meetings at experts level, as well as through dialogue and cooperation frameworks initiated by ASEAN, such as the ASEAN Regional Forum (ARF), the Post Ministerial Conference (PMC) 10+1, the East Asia Summit (EAS), Mekong-Ganga Cooperation and Bengal Initiative for Multisectoral Technical and Economic Cooperation (BIMSTEC), which help contribute to enhancing regional dialogue and accelerating regional integration.

• India’s bilateral trade with ASEAN economies is expected to reach $300 billion by 2025, and it is the fifth largest trading partner for India following North America, EU, North-East Asia and GCC-West Asia.

• The ASEAN-India Free Trade Area has been completed with the entering into force of the ASEAN-India Agreements on Trade in Service and Investments on July 1, 2015.