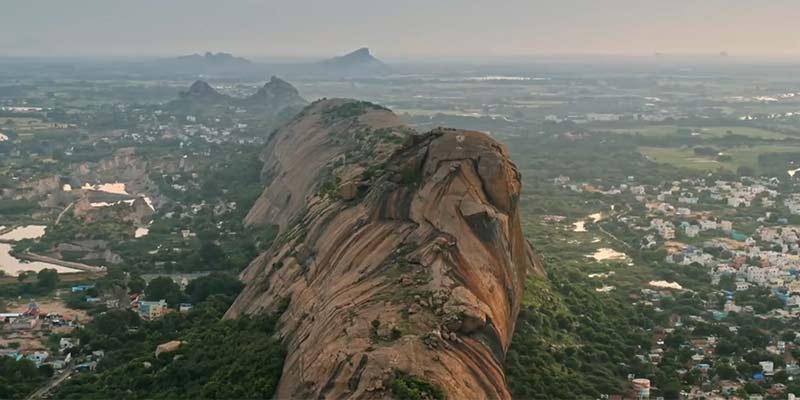 • Tamil Nadu has notified Arittapatti and Meenakshipuram villages in Madurai district as the first biodiversity heritage site aimed at preserving the rich biological repository in the region.

• The village Arittapatti consists of a chain of seven barren granite hillocks. The distinctive landscape of rocky hills acts as a watershed and supports 72 lakes, 200 natural spring pools and three check dams.

• The Tamil Nadu government has notified 193.215 hectares of land area in Arittapatti and Meenakshipuram villages in Madurai district as the ‘Arittapatti Biodiversity Heritage Site’ under the Biological Diversity Act of 2002.

• The decision to declare Arittapatti as a biodiversity heritage site was made after consulting the local communities, department of archaeology, Tamil Nadu Minerals Ltd and other stakeholders.

• A few hillocks in Arittapatti village has a rich biological and historical significance with the presence of around 250 bird species, including three flagship Raptor species — Laggar Falcon, Shaheen Falcon, Bonelli’s Eagle and wildlife like Indian Pangolin, python and Slender Loris.

• One of the water bodies in the region, Anaikondan Lake, was built during the Pandyas period in the 16th century.

• The notification as a biodiversity site would strengthen the conservation efforts with the participation of the local communities. It would help to preserve the rich biological and historical repository of the area.

• Earlier this month, the government notified the Cauvery South Wildlife Sanctuary on 68,640 hectares as the state’s 17th wildlife sanctuary of the state.

• The 1992 Earth Summit at Rio de Janeiro led to the preparation of the international legal instrument, the ‘Convention on Biological Diversity’  during the UN Conference on Environment and Development (UNCED) for the conservation, sustainable use and fair and equitable sharing of benefits of biological diversity.

• The Act extends to the whole of India.

• The Act provides a legal framework for conservation of biological diversity, sustainable use of its components, fair and equitable sharing of the benefits arising out of the use of biological resources and generation and dissemination of knowledge.

• A three-tier institutional structure was formed for implementation of the BD Act 2002, whereby the National Biodiversity Authority (NBA) was established in 2003 under Section 8 of the Act.

• The NBA is a statutory body that performs facilitative, regulatory and advisory functions for the government. The NBA, with its headquarters in Chennai, implements the BD Act at the national level as the first tier.

• The second and the third tier constitute the State Biodiversity Boards (SBBs) at the state level and Biodiversity Management Committees (BMCs) operating at the local level.

The National Biodiversity Authority is a body established in accordance with the provisions of Section 8 of the Biological Diversity Act, 2002, at Chennai with effect from October 1, 2003 under the ministry of environment, forest and climate Change.

It is an autonomous, statutory and regulatory organisation which is intended to implement the provisions of Biological Diversity Act, 2002.

The main objectives of NBA are:

• To regulate access to biological resources of the country to conserve and sustainable use of biological diversity.

• Protection and rehabilitation of threatened species.

• Involving with institutions of state government in the broad scheme of implementation of the BD Act through constitution of committees.

State Biodiversity Boards (SBBs) are established under Section 22 of the Act.

• Advise the state governments, subject to guidelines issued by the central government, on matters relating to conservation of biodiversity, sustainable use of its components and equitable sharing of benefits arising out of utilisation of biological resources.

• Regulate by granting approvals or otherwise request for commercial utilisation or bio-survey and bio utilisation of any biological resource.

A Biodiversity Management Committee (BMC) is constituted by a local body within its area for the purpose of promoting conservation, sustainable use and documentation of biological diversity.

• Prepare, maintain and validate People’s Biodiversity Register in consultation with the local people.

• Advise on any matter referred to by the SBB or NBA for granting approval, to maintain data about the local vaids and practitioners using the biological resources.

• Levy charges by way of collection fees for accessing or collecting  bio-resource for commercial purpose from its territorial jurisdiction.