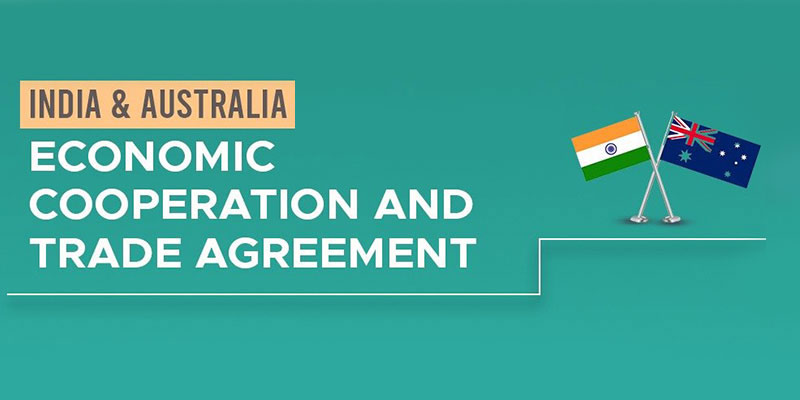 The agreement was signed between the two countries in April this year.

The pact needed ratification by the Australian Parliament before its implementation. In India, such pacts are approved by the Union Cabinet.

Last week, the Joint Standing Committee on Treaties of Australia recommended the Australian government to ratify the pact.

After the ratification, both sides will decide a date to implement the pact and customs authorities will also issue a notification a day before the implementation.

The agreement would help in taking the bilateral trade from $27.5 billion at present to $45-50 billion in the next five years.

• India and Australia established diplomatic relations in the pre-Independence period, with the establishment of India Trade Office in Sydney in 1941. The end of the Cold War and simultaneously India’s decision to launch major economic reforms in 1991 provided the first positive move towards development of closer ties between the two nations.

• The bilateral relationship has undergone evolution in recent years, developing along a positive track, into a strategic partnership.

• Building on the elevation of relations with Australia from a Strategic Partnership to a Comprehensive Strategic Partnership (CSP) in June 2020, the year 2021-22 saw increasing depth and breadth of engagements in the bilateral, trilateral and plurilateral formats, with progress made on various initiatives agreed under the CSP, including establishment of new mechanisms for cooperation.

• Australia is the 17th largest trading partner of India, while New Delhi is Canberra’s 9th largest partner. India’s goods exports were worth $6.9 billion and imports aggregated to $15.1 billion in 2021.

• India and Australia are partners in the trilateral Supply Chain Resilience Initiative (SCRI) arrangement along with Japan which seeks to enhance the resilience of supply chains in the Indo-Pacific Region.

• Further, India and Australia are also members of the Quad, also comprising the US, and Japan, to further enhance cooperation and develop partnership across several issues of common concern.

• The India-Australia ECTA will further cement the already deep, close and strategic relations between the two countries and will significantly enhance bilateral trade in goods and services, create new employment opportunities, raise living standards, and improve the general welfare of the peoples of the two countries.

• Australia has traditionally been a major trading partner for the Indian garment industry with exports occupying a share of about 4 per cent of total Australian garment imports.

Highlights of the agreement

• The ECTA provides for an institutional mechanism to encourage and improve trade between the two countries.

• The ECTA covers almost all the tariff lines dealt in by India and Australia respectively.

• The agreement, once implemented, will provide duty-free access to the Australian market for over 6,000 broad sectors of India, including textiles, leather, furniture, jewellery and machinery.

• Under the pact, Australia is offering zero-duty access to India for about 96.4 per cent of exports (by value) from day one. This covers many products that currently attract 4-5 per cent customs duty in Australia.

• For the pharma segment, the pact would provide fast-track approvals and fast-track quality assessment/inspections of manufacturing facilities.

• In the services sector, benefits for India include post study work visa of 2-4 years for Indian students on reciprocal basis, and work and holiday visa arrangement for young professionals.

• The pact will create new opportunities for jobs and businesses in both countries, while laying the foundations for a full free trade agreement.