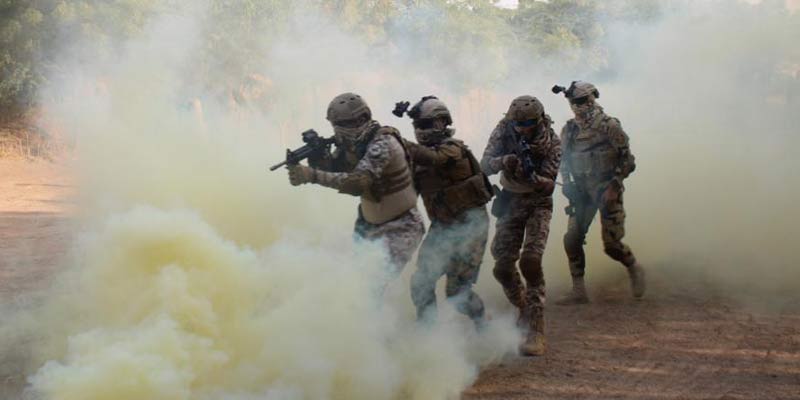 • The first ever joint exercise between the special forces of the Indian Army and the Egyptian Army named ‘Exercise Cyclone-I’ began in Jaisalmer on January 14, 2023.

• The exercise aims to bolster defence cooperation between the two nations and focus on sharing professional skills and interoperability of special forces in desert terrain while undertaking counter terrorism, reconnaissance, raids and other special operations.

• ‘Exercise Cyclone-I’ is the first exercise of its kind bringing the special forces of both the nations on a common platform.

• The 14 days long exercise which is being carried out in the desert of Rajasthan engages both the contingents to advance special forces skills.

• The participants would also undertake joint planning and drills for special forces operations in a mechanised warfare setting as well as surgical strikes on terrorist camps/hideouts to include sniping of high value targets.

• India and Egypt, two of the world’s oldest civilisations, have enjoyed a history of close contact from ancient times. Ashoka’s edicts refer to his relations with Egypt under Ptolemy-II.

• Mahatma Gandhi and Saad Zaghloul shared common goals on the independence of their countries, a relationship that was to blossom into an exceptionally close friendship between President Gamal Abdel Nasser and Prime Minister Jawaharlal Nehru, leading to a Friendship Treaty between the two countries in 1955.

• The joint announcement of establishment of diplomatic relations at Ambassadorial level was made on August 18, 1947.

• Both countries have cooperated closely in multilateral fora and were the founding members of Non-Aligned Movement.

• The year 2022 marked the 75th anniversary of diplomatic relations between India and Egypt.

• Egypt has traditionally been one of India’s most important trading partners in the African continent. The India-Egypt Bilateral Trade Agreement has been in operation since March 1978 and is based on the Most Favoured Nation (MFN) clause and the bilateral trade has increased more than five times in the last 10 years.

• During 2021-22, the top Indian imports from Egypt were mineral oil/petroleum, fertilisers, inorganic chemicals and cotton. Main items of export to Egypt from India were buffalo meat, iron & steel, light vehicles and cotton yarn.

• According to the Egyptian Central Agency for Public Mobilization and Statistics (CAPMAS), India was the third largest export market for Egypt, sixth largest trading partner and seventh largest exporter to Egypt.

• Bilateral mechanisms are in place to facilitate trade and economic relations between India and Egypt.

• Around 50 Indian companies have invested in various sectors in Egypt with a combined investment exceeding $3.15 billion. Egyptian investments in India are to the tune of $37 million.

• Egypt signed the International Solar Alliance framework agreement as a founding member in March 2018 and ratified it in January 2019.

• Egypt and India enjoy cordial defence relations. Most of the current defence cooperation is determined by Joint Defence Committee (JDC) activities. Starting in 2006, nine JDC meetings have been held alternately in either country, followed by exchange activities.