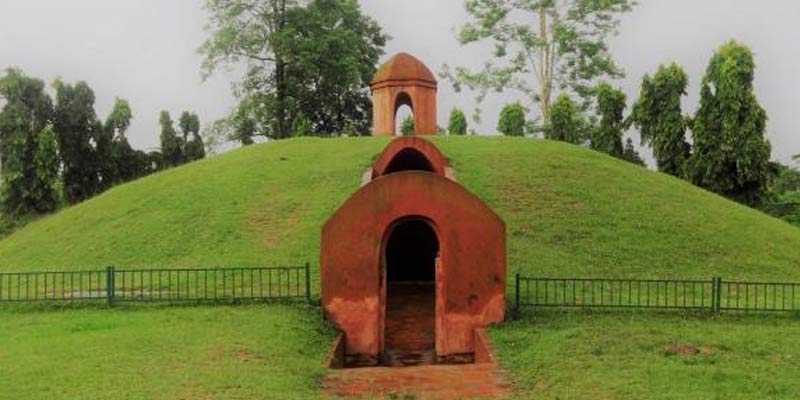 • ‘Maidams’, the burial mounds of Ahom royalty also known as “Assam’s pyramids”, will be India’s sole nomination for recognition as a UNESCO World Heritage Site this year.

• The dossier on the ‘maidams’, in Assam’s Charaideo district, has been selected by Prime Minister Narendra Modi out of 52 heritage sites across the country seeking the coveted tag.

• The ‘maidams’ or the mound burial system of the Ahom dynasty in Charaideo was first listed in the tentative list of UNESCO’s World Heritage site in April 2014.

• The UNESCO team will visit Charaideo in September and it is expected to be declared a World Heritage site by March 2024, Assam Chief Minister Himanta Biswa Sarma said.

• The ‘maidams’ will be under the cultural segment as per the categorisation of World Heritage Sites.

• There is currently no World Heritage site in the category of cultural heritage in the northeast out of the 32 listed in the country. Manas and Kaziranga National Parks, both in Assam, are World Heritage Sites under the natural category, of which there are seven in India.

Maidams of of the Ahom dynasty

• The Ahoms came to Assam in 1228 AD and ruled for nearly 600 years. The Ahom dynasty was established by Chao Lung Siu-Ka-Pha, a Shan prince of Mong Mao who came to Assam after crossing the Patkai Mountains. The rule of this dynasty ended with the Burmese invasion of Assam and the subsequent annexation by the British East India Company following the Treaty of Yandabo in 1826.

• Charaideo, more than 400 km east of Guwahati, was the first capital of the Ahom dynasty.

• The word Charaideo has been derived from three Tai Ahom words, Che-Rai-Doi. Che means City or Town, Rai means Shine or Dazzle and Doi means Hill or Mountain. In short, Charaideo means, “a shining town situated on a hilltop.”

• The series of maidams at the foothills of the Patkai range together show the sculpted burial landscape reminiscent of the hills. The group of maidams in Choraideo has been systematically restored to safeguard its structural integrity.

• Maidams are vaulted chamber (chow-chali), often double storied entered through an arched passage. Atop the hemispherical mud-mound layers of bricks and earth is laid, where the base of the mound is reinforced by a polygonal toe-wall and an arched gateway on the west.

• Eventually the mound would be covered by a layer of vegetation, reminiscent of a group of hillocks, transforming the area into an undulating landscape. Excavation shows that each vaulted chamber has a centrally raised platform where the body was laid.

• Several objects used by the deceased during his life, like royal insignia, objects made in wood or ivory or iron, gold pendants, ceramic ware, weapons, clothes to the extent of human beings were buried with their king.

• After the 18th century, the Ahom rulers adopted the Hindu method of cremation and later entombed the cremated bones and ashes at the maidams at Charaideo.