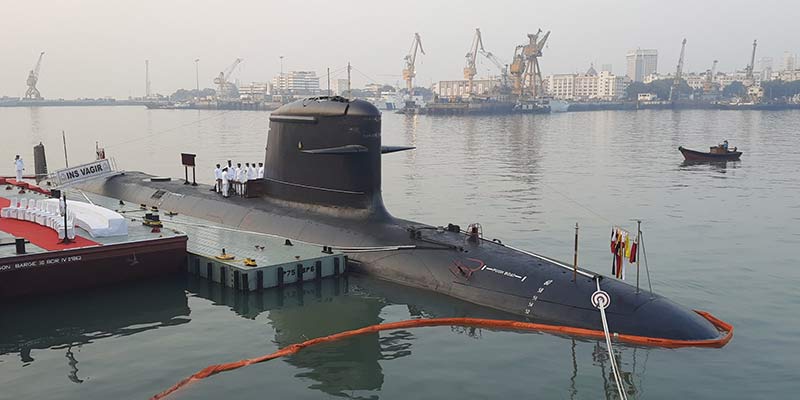 • INS Vagir, the fifth submarine of the Kalvari Class submarines, was commissioned into the Indian Navy on January 23.

• Vagir is part of the six Kalvari-class submarines being built in India.

• The induction of the submarine, built under Project-75, is set to bolster the Indian Navy’s combat capability.

• These submarines can undertake missions like anti-surface warfare, anti-submarine warfare, intelligence gathering, mine laying, and area surveillance. The attack can be launched with both torpedoes and tube launched anti-ship missiles, whilst underwater or on surface.

• Vagir is named after the Sand Fish, a deadly deep sea predator of the Indian Ocean. The first Vagir, a submarine from Russia, was commissioned into the Indian Navy on December 3, 1973, and was decommissioned on June 7, 2001 after almost three decades of service to the nation.

• Launched on November 12, 2020, Vagir commenced the sea trials from February 1 and completed all major trials including the weapon and sensor trials in the shortest time in comparison to the earlier submarines.

• The submarine is designed to operate in all theatres of operation, showcasing interoperability with other components of a Naval Task Force.

• Vagsheer, the sixth and the last Scorpene-class submarine constructed under Project-75 of the Indian Navy, was launched on April 20, 2022. Vagsheer will undergo a comprehensive and rigorous set of tests and trials for more than a year to ensure that it is fully combat-worthy.