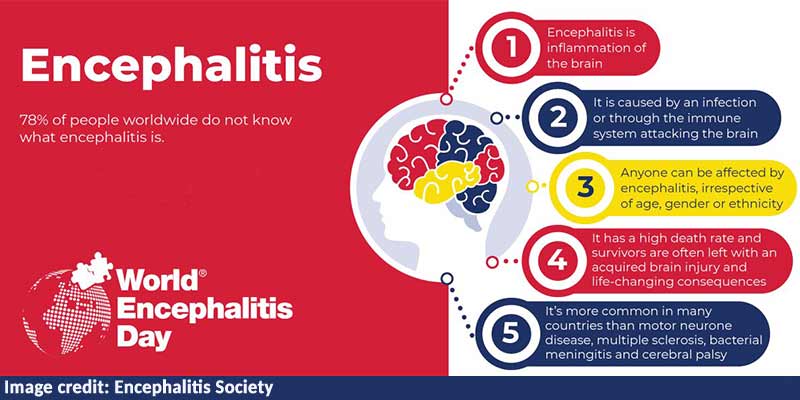 • World Encephalitis Day is the global awareness day for people who have been directly or indirectly affected by encephalitis.

• Founded by The Encephalitis Society in 2014, it is held on February 22 each year.

• Having reached more than 186 million people around the world in previous years, now in 2021, World Encephalitis Day seems more relevant than ever before.

• Seventy-eight per cent of people across the world do not know what encephalitis is.

• The theme of this year's World Encephalitis Day is “Lights, Camera, Action”, with landmarks around the world, including Niagara Falls (Ontario, Canada) and the Danube bridges in Vienna (Austria), being lit red to raise awareness.

• For this year's Lights Camera Action campaign the foundation is lighting up over 90 global landmarks around the world and encouraging supporters to go #Red4WED by wearing red on Monday, 22nd February, and telling people about why it is important more people know about encephalitis.

• Encephalitis is inflammation of the brain – a devastating neurological condition, which can leave survivors with a permanent brain injury.

• 500,000 children and adults are affected by encephalitis every year, that is one person every minute.

• There is low awareness of the condition – 78% of people do not know what encephalitis is - despite the fact that in many countries it has a higher incidence than multiple sclerosis, motor neurone disease (ALS), bacterial meningitis, and cerebral palsy.

• Symptoms of encephalitis vary but can include flu-like illness or headache, drowsiness, uncharacteristic behaviour, inability to speak or control movement, psychiatric manifestations, memory problems and seizures.

• Death rates are high. Survivors can be left with an acquired brain injury resulting in a wide range of difficulties such as problems with memory and other cognitive skills, changes in personality, emotional and behavioural difficulties, epilepsy, fatigue and other physical difficulties which can make return to school, work, family and social life very challenging.