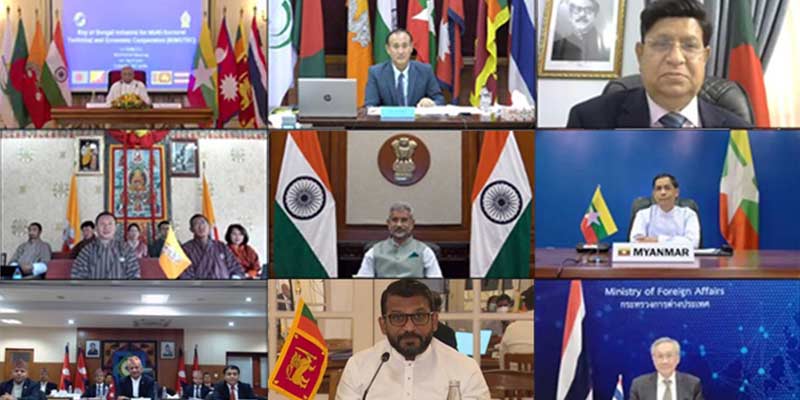 A ministerial meeting of the BIMSTEC endorsed a master plan for regional connectivity even as India said it was high time for the grouping to make a “paradigm-shift” in raising the level of cooperation and regional integration.

Minister of External Affairs S. Jaishankar, participated in the 17th BIMSTEC Ministerial Meeting on April 1, 2021. The meeting, chaired by Sri Lanka, was held in virtual mode with the participation of all BIMSTEC Member States.

• It is a regional bloc comprising seven countries lying in the littoral and adjacent areas of the Bay of Bengal constituting a contiguous regional unity.

• This sub-regional organisation came into being on June 6, 1997 through the Bangkok Declaration. It constitutes five countries from South Asia (Bangladesh, Bhutan, India, Nepal and Sri Lanka) and two from Southeast Asia (Myanmar and Thailand).

• Initially, the economic bloc was formed with four member states with the acronym BIST-EC (Bangladesh, India, Sri Lanka and Thailand Economic Cooperation). Following the inclusion of Myanmar on December 22, 1997 during a special ministerial meeting in Bangkok, the group was renamed BIMSTEC (Bangladesh, India, Myanmar, Sri Lanka and Thailand Economic Cooperation).

• With the admission of Nepal and Bhutan at the sixth ministerial meeting in February 2004, the name of the grouping was changed to Bay of Bengal Initiative for Multi-Sectoral Technical and Economic Cooperation (BIMSTEC).

• India has been pushing for making BIMSTEC a vibrant forum as various regional initiatives under SAARC were not moving forward primarily due to non-cooperation from Pakistan.

• For India, BIMSTEC is a natural choice to take forward key foreign policy priorities like ‘Neighbourhood First’ and ‘Act East’ as the bloc enjoys the strength of connecting South and Southeast Asia.

The meeting welcomed a proposal to hold the fifth BIMSTEC Summit in Sri Lanka in the next few months.

It endorsed the master plan for transport connectivity for adoption at the grouping’s next summit.

Three other agreements were also endorsed. They are:

• The BIMSTEC Convention on mutual legal assistance in criminal matters.

The meeting took note that the BIMSTEC Centre for Weather and Climate, being hosted in India, is fully functional with the state of the art facilities to provide Disaster Early Warnings.

In his address, Jaishankar mentioned that the BIMSTEC Convention on Cooperation in Combating International Terrorism, Transnational Organised Crime And Illicit Drug Trafficking has come into force last month.