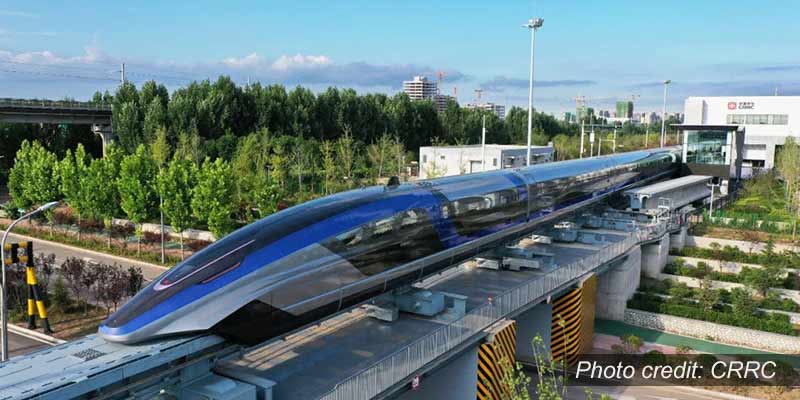 China unveiled a high-speed magnetic-levitation (maglev) train with a designed top speed of 600 kms per hour, stated to be the world’s fastest ground vehicle.

The new maglev transportation system made its public debut in the coastal city of Qingdao, in China’s east Shandong province.

What is the principle behind maglev?

• Maglev trains were conceptualised during the early 1900s by American professor and inventor Robert Goddard and French-born American engineer Emile Bachelet and have been in commercial use since 1984, with several operating at present and extensive networks proposed for the future.

• Using electro-magnetic force, the maglev train “levitates” above the track with no contact between body and rail.

• Several train systems using maglev have been developed over the years, with most operating over relatively short distances. Between 1984 and 1995, the first commercial maglev train system was developed in the UK.

• Countries like Japan and Germany are also looking to build maglev networks, although high costs and incompatibility with current track infrastructure remain hurdles to rapid development.

• The train is designed and made by the CRRC Qingdao Sifang Co, a wholly owned subsidiary of China.

• Launched in October 2016, the high-speed maglev train project saw the development of a magnetic-levitation train prototype with a designed top speed of 600 kms per hour in 2019, and conducted a successful test run in June 2020.

• The train can travel with two to 10 carriages, each holding more than 100 passengers.

• The train provides the best solution for trips within the range of 1,500 kms.

• China has been using the technology for almost two decades on a very limited scale. Shanghai has a short maglev line running from one of its airports to town.

• While there are no inter-city or inter-province maglev lines yet in China that could make good use of the higher speeds, some cities including Shanghai and Chengdu have started to conduct research.